A view of the Market Place

The Market Place has changed more than any other part of our village. Of course, until the 1850s we’d certainly have been classed as a town and actual markets would have been held in the Market Place. By the 1950s parts of the old square were derelict and other buildings were deemed to be in the way of progress. It was time for change.

Here we see a view before change, although the evidence of demolition work is there. 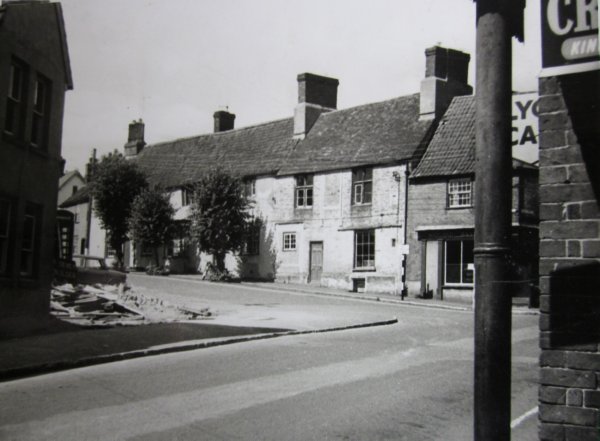 Market Lavington Market Place in about 1959

The view is taken from the end of Chapel Lane (the path down to the fish and chip shop). We wonder if the photographer was pleased with his or her framing of the scene. The bits of advertising sign and a gutter downspout might have seemed odd at the time, but they add interest now.

So, we look at the East side of the Market Place with its delightful row of Tudor aged buildings. These were all swept away, to be replaced with a car park for the agricultural engineers. These days we’d see this as wanton vandalism, but we must not be too harsh on the folks of fifty or more years ago who saw an expanding engineering company as more employment and so more money in the local economy – a benefit for everyone.

On the left hand side we can see the end of the Co-op building and a heap of rubble. Behind the rubble a sign can just be made out saying ‘Dewey, Builder’. Next to that is a mini – the one visible car. These were introduced in 1959 which probably dates our photo quite well.

Now to those signs on the right. One is clearly for Lyons Cakes but the other has us baffled. All we have is the big word beginning with CR and the smaller word with KIN. Any ideas?

The changes of the 1960s have now all been swept away. We’d now be looking at the chemist shop and Rochelle Court, built on the site of those agricultural engineers.