Today we look back to the dark days of World war II when the future of our country hung in the balance, But let us not say that nothing changed as a result of the war. Fifty per cent of the population had skills which could no longer be wasted as they had been before. I refer, of course, to women. Before the war many jobs and activities were deemed to be beyond the capability of females. But with the men away fighting, somebody was needed to do vital jobs at home. Women took over. Sometimes, of course, they had paid jobs but others volunteered. The Women’s Voluntary Service (WVS) did so much to help the country that, eventually ‘Royal’ was added to the name and it became the WRVS.

Much of what the WRVS did was in what might have been thought of as traditional female roles – caring and catering. But these activities could be in any location so women took up driving.

There was a voluntary uniform for the WVS, but it was not given. Women who wanted it had to buy it so most just had lapel badges or arm bands. Today we show such an arm band. 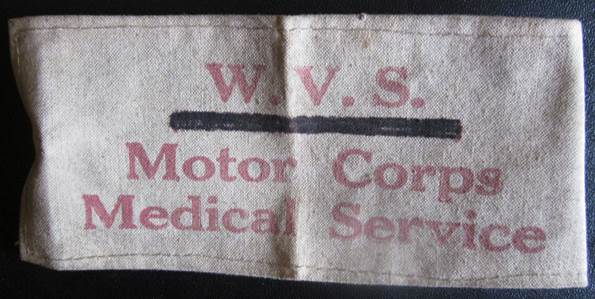 A WVS arm band from World War II. It canm be found at Market Lavington Museum.

We’d love to know what the obliterated small writing said!

This armband reminds us of tasks carried out by a million or more volunteer women, who turned their hand to any job that needed doing. It was given to Market Lavington Museum by Mrs Pullan of Drove Lane in Market Lavington.