As of 2011 West Park Farm is the dairy farm in Market Lavington. It has been a dairy farm for at least 90 years and it was 80 years ago that they acquired their own rail wagons for sending milk up to London. 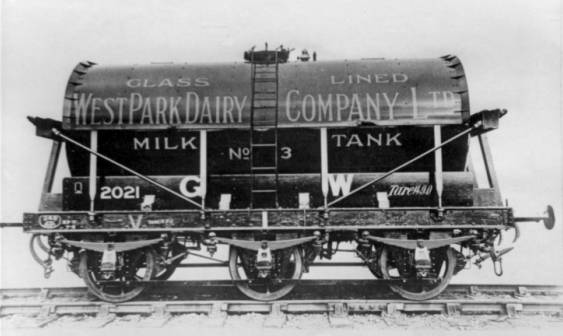 The first four tanks to be used by West Park Dairy went into service in 1931. This one, on chassis 2021 was one of them. Another couple joined them in 1934. They were 3000-gallon glass lined tanks and that weight required a 6-wheeled Great Western Railway chassis to support it.

The first delivery of milk by these tanks was in October 1931. The tanks were filled at Lavington Station on the first of October and unloaded at Cricklewood (London) the next day.

The tanks were bought by Mr Hubert Lawrence, who owned West Park Farm and Dairy. They were supplied by the Holland Tank Company. The tanks were painted brown and had yellow lettering on them.

These wagons are fitted with a patent sun canopy, which left an air space between it and the top of the tank.