Our curator recently received a lovely wedding photo – for a Market Lavington wedding on 21st August 1901. The photo of the happy couple with the groom’s relatives was taken (we believe) at the back of the blacksmith’s property, probably on White Street. The groom, Bob Merritt was a blacksmith. 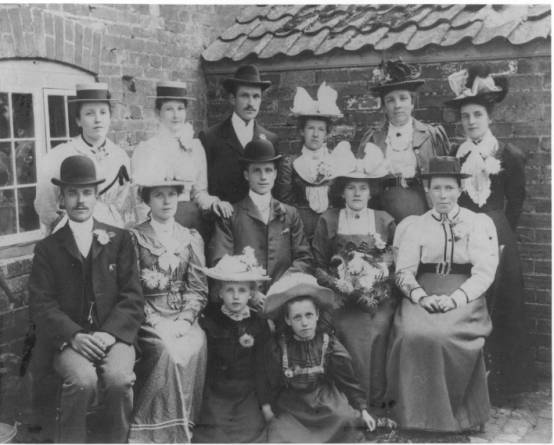 Wedding photo of Bob Merritt and Ada Bolter on 21st August 1901. The photo is at Market Lavington Museum

This photo has been named in a wonderfully artistic way with very neat pencil sketches of the people in the picture.

Artistic captions for the wedding at Market Lavington

Sitting in front we have Harry Giddings and then Florrie Parsons. The groom was Bob Merritt and his bride, next to him was Ada Bolter. Next we have Emily Merritt, the mother of the groom.

The little girls sitting on the ground were thought to have been daughters of Mary Ann Pike but ages and dates just don’t tie up, so they are unknown to us. Maybe somebody out there can help identify them.

We think this is a glorious photo of ordinary folk dressed up in their wedding finery.