The physical museum may have shut its doors for this season. It is now nominally closed until May of 2011 but do contact the curator if you wish to visit for he’ll do his best to accommodate requests. However, the virtual museum continues as normal.

The recently ‘blogged’ Rolls of Honour for the first and second world wars have attracted hits and responses. Regular correspondent John in Australia has suggested the following about some names on the Second World War list.

Another correspondent, Philip, had this to say about William Elisha.

I notice there’s a William Elisha – Bill Elisha was Mrs. Elisha’s husband as far as I remember.  He was up at the field named after him one summer years (decades!) ago when something or other was going on in the field and we had relatives down from Aylesbury.  He got on the microphone and said in broad Wiltshire something about an item that had gone missing and my relatives fell about laughing at his accent.

Mrs Elisha was for many years the local school’s infant teacher. Philip goes on to say:

On another note, Mrs. Elisha was a stand-in teacher at St. Barnabas Primary School when I was there in the 70’s – I remember her being quiet but very firm.  She never really taught anything as such but was a bit like Jack Hargreaves in ‘Out of Town’ always re-living olden times for us.  I used to go home for lunch and remember not wanting to when she was standing in, in case I missed anything.  Mr Greenwood, the then Headmaster was almost reverential towards her.

And now to those women on active service in world war two – and maybe some more memories will come in. 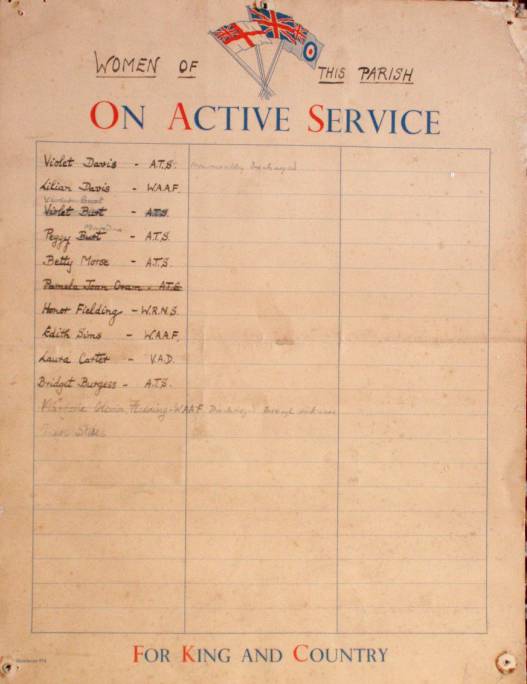 So here we have:

Do get in touch if you have any information about these people. You can help make the history come alive.