Our photo of this couple, at Market Lavington Museum, shows them in a pony trap on Drove Lane. 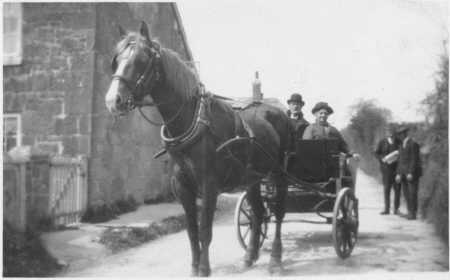 Albert and Mary Jane Hurle in their trap on Cemetery Lane, Market Lavington

At the time of this photo (the 1920s), Drove Lane was called Cemetery Lane. It remained with that name until the 1950s when the older ‘Drove’ name was reinstated.

We think Albert was born in Bratton in 1863 and that he married his wife Mary Jane Hurle (same surname before and after marriage) in 1890. Albert’s father was a blacksmith.

Albert and Mary Jane lived long lives. Mary Jane was said to be 88 when she died and Albert 91. Both are buried in St Mary’s churchyard. Mary Jane’s address was given as Cemetery Lane. Albert was in Chippenham but formerly of Cemetery Lane.

If you can tell us more about this family then do contact us.