A Canadian soldier of The Great War

A recent web search by our curator found him something long wanted. It was documentary evidence that Lavington Manor house had been used as a military hospital by the Canadians. Oral history had said this was the case, but now one soldier’s medical record confirms it was used.

Hospital record for Alec Paterson
Click it to see a much larger version of the image.

The top entry tells us that Alec spent three days in Lavington Manor, from the ninth to the twelfth of January 1915 suffering from influenza – described as a mild attack due to wet and exposure. He made a good recovery.

Alec was an officer – a lieutenant in the 2nd battery of the Canadian Field Artillery – and had been leading his men in training across the windswept downland of Salisbury Plain through one of the wettest winters on record. Of course, we know that flu is a viral infection and is not actually due to weather conditions although it may flourish in certain environments.

Anyway, Lieutenant Paterson was able to leave Wiltshire for France on 10th February 1915. This is an extract from the Canadian war diary.

War diary for 10th February. The Canadians are off to the war.
Click to enlarge.

By this time the HQ had moved to Market Lavington which is why the entry was made there. But we believe the trains left from Patney and Chirton station which would have offered a more direct route to Avonmouth for the strangely circuitous sea voyage to the continent.

Despite the dislocated shoulder and the effects of a gas attack mentioned in the hospital report, Alec survived the war by which time he had risen to the rank of Major. And it is in that uniform that we see him here. 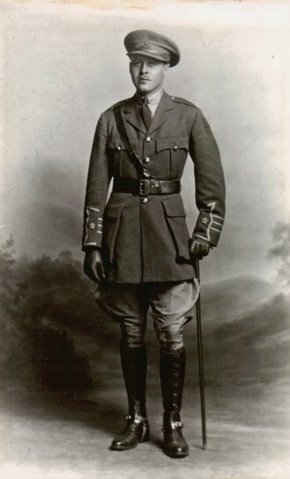 Alec Paterson after his promotion to Major

Now to redirect readers to the blog produced by Alec’s grandson, Robert.

You can click here to find the post our curator discovered and from that you can navigate to all sorts of fascinating pages about the Canadians whilst still in Canada, in Wiltshire and then on to the hell of Vimy Ridge.

Many thanks to Robert for allowing us to share and use his family information.