There can never be any doubt that Alfie Alexander was a village character. Stories about him abound, mostly admiring his initiative when it came to money making ventures or being amused by some of them. At one time Alfie was the Market Lavington dustman – an entirely private enterprise venture. But on another occasion he could be seen striding alongside Winston Churchill as he was off to deliver his 1927 budget speech. We don’t think Alfie actually knew Churchill, but it certainly looks like it in the photo.

Alfie could look like the scruffiest down and out you could wish for, or he could be the smartest, most distinguished looking man you might see.

Perhaps we should say that Alfie lived life to the full.

We have recently been given a photo which we believe was taken at his Golden Wedding party. Alfie and Sarah married in 1886 so we think this photo dates from 1936. 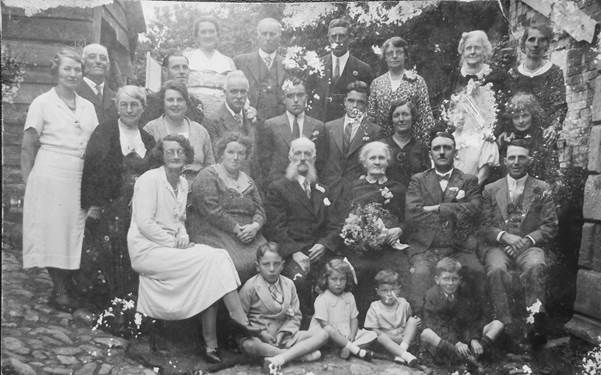 If we are right that this was the Golden Wedding party, then it was on 14th August for one memory recalls:

On 14th August 1936 Alfie and Sarah celebrated their Golden Wedding Anniversary. Apparently it was an all-day affair with waiters in frock-coats and bought-in caterers!

In the photo we see the utterly distinctive whiskered features of Alfie and next to him, his wife Sarah with a bouquet of flowers. From there on in we get into a bit of guesswork, but we think the other four seated adults are the surviving children of the golden couple. Norman was born in around 1888 and Alice in 1891. Deering was born in 1898 and Gladys in 1902. We imagine the children are grandchildren of Alfie and Sarah.

And as for the standees, behind the couple – at present we have no idea, but maybe there’s somebody out there who can give us an idea. The Alexanders were active members of the Congregational Church so perhaps we see other members of that community.