An aerial view of Market Lavington

Today we are looking at a photo which dates from 1980. It is a colour photo of Market Lavington from the air. 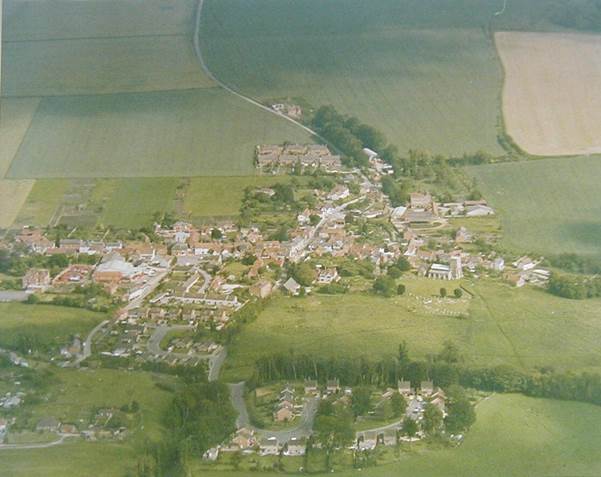 That’s quite a picture of England’s green and pleasant land.

Let’s work through the scene.

This is Canada Rise with Canada Woods behind the houses. If we look further to the left we have the top of Northbrook.

Beyond Northbrook we can see Bouverie Drive, the former Vicarage which is now the nursing home and the large roof of the ‘Wilts Ag’ building which is where Rochelle Court now stands.

Moving further we can see the market place with the butcher’s shop clearly visible on the High Street.

Towards the top of the picture we see Lavington Hill. There’s a round topped shed in The Hollow and at the bottom of this section of picture we can see Knapp Farm.

Next we have Knapp Farm in the centre and White Street on the left.

The field on the right has an interesting past. We believe it was in use as (or considered for use as) an air strip during the First World War. Jack Welch, who was the father of our museum founder, Peggy Gye made a comment in a letter he sent home

An aerodrome out in the Recreation Ground is getting a bit too close isn’t it? Lavington must be very much altered especially with the felling of so much timber.

Completing the tour round this picture we have the church with The Old House on the left and Grove Farm on the right. The Grove Farm estate had not been built then.