The good folks who were members of the Methodist Chapel in Easterton are off to the seaside. And, praise be, it seems as though a sunny day has been delivered to them for this rare, once a year treat. The year in question was 1927 and the date was June 4th. Back in those days this was known as Whit Saturday. 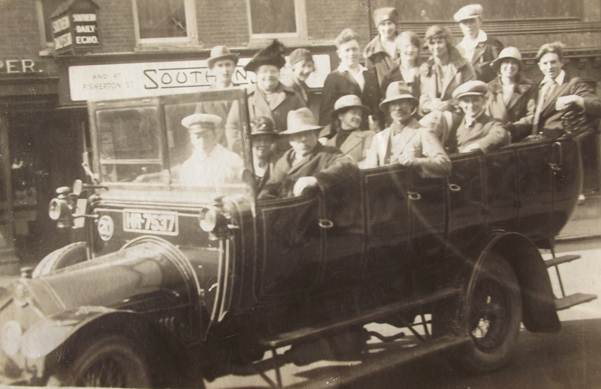 Easterton Chapel outing en route to Bournemouth on 4th June 1927. The bus belonged to the Lavington and Devizes Motor Service.

The photo was taken in Salisbury. Southons, whose shop we see behind the bus still have a furniture store in Salisbury. These charabancs had limited facilities and a badge on the front suggests they were limited to 20 miles an hour so the travellers would already have endured more than an hour, crammed into the little vehicle. What the coach trade seemed to call a ‘T and P’ stop was essential. And whilst stopped, an enterprising photographer could take a photo for collection on the return journey. On this occasion we know the destination was Bournemouth. That’s about 28 miles from Salisbury so that would take another hour and a half.

As yet we have not identified passengers on the bus but we have an inkling that the driver was Harry Hobbs.

However, the bus has managed to get its registration plate in the picture HR 7537 and that gives experts a chance to know more about it. The charabanc is a Crossley X type and was part of Fred Sayer’s Lavington and Devizes Motor Service fleet. Fred had probably acquired the chassis from the war department and the body work may have been added by Fred or another local builder. This bus was registered to Fred’s company in November 1922. It is believed to have been out of Fred’s use by January 1929.

Wouldn’t it be good if we could get as much information about passengers? Over to you!