Here we present extracts from the memories of  Fred, Albert, Tom, Dora and Poppy Emms. They were world war 2 evacuees from London. They spent a little while on a farm near Chippenham, then some time in Devizes and then…

… the Billeting Officer offered our Mum and Aunt Bella two joint cottages behind the fire station in the market place Market Lavington. The cottages were very old, had no plumbing and we had an old pump outside the door. It was shared by all the neighbours it was not nice for drinking. We got our water from Broadwell and that was very nice. For the toilet we had to walk about seven hundred yards through the gardens to some tin sheds with buckets that you had to empty every week but we did have the Daily Mirror for toilet paper. The toilets were by Mr James’ field. A brick wall kept us apart.

At the cottage we did have electricity but no kitchen. I do not remember all the names of our neighbours. The ones I do remember were Mr and Mrs Owen with son Basil and daughter Poppy, Mr and Mrs Jackson and family, Mrs Robbins and son Chuffy, Mr and Billy Cooper and Mrs Ingrams. I know there were a lot more but I have forgotten the names.

Once we settled down we made lots of friends such as Mr and Mrs Chapman, Aubry, Tony, Roy, and Gran, Mrs Cooper, the Jenks, the Orams, the Wells, and the Burt families. 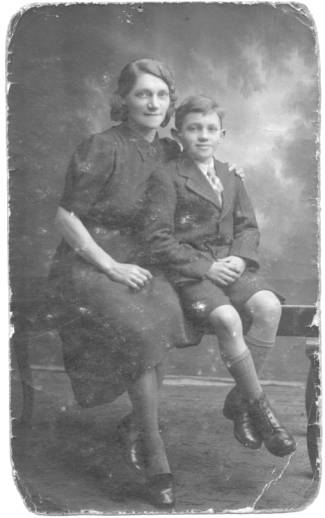 This is the Aunt Bella referred to – Bella Marshall and her son Jimmy who were evacuated to Market Lavington.

Another extract from these memories reads…

… I know we were too young to go in pubs, but our mums did. They used the Volunteer. The landlady was, I believe, Mrs Trotter. It was there that Bobby Mapp and Howard May, two soldiers from the army barracks, entertained. Howard played the accordion, and Bobby sang. 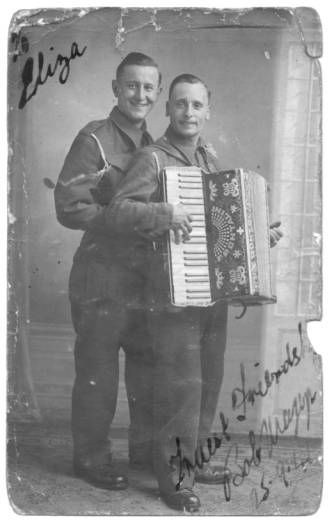 Bobby Mapp and the accordion player entertained in Market Lavington.

This photo was given to Eliza, Mrs Emms, by Bob Mapp on 25th September 1941. Our museum information differs from these memories for we have it that  Bobby Mapp is on the left and possibly Arthur Golbur with the piano accordion. Maybe a reader can put us straight on that.