Yesterday we saw a group of youngsters which included Marjory Milsom. Today we are looking at an item which she probably used in the course of work. Marjory became a mechanic, working at her father’s garage on Church Street. The location is clear because modern housing on his garage site is called Milsom Court.

A car repair garage has a need for plenty of engine oil and, no doubt, lubricating oil as well. Such quantities of oil tend to be supplied in large metal drums. If oil is to be emptied via a tap, then the drum needs to be off the ground. It was much easier to have a small pump which fitted into the top of the drum, via the fill hole. And that is what we are seeing today.

There is the pump, resting against the top of the stairs. The tube below the label went into the drum. The position of the platform for putting an oil jug on can be adjusted so that the pipe could reach down to the bottom of the drum. The handle at the top could then lift the oil up to pour out of the spout, falling into the jug.

No doubt the fact that this pump was used for oil helped to keep it in tip-top condition. Being largely of brass construction, corrosion would have been minimal. 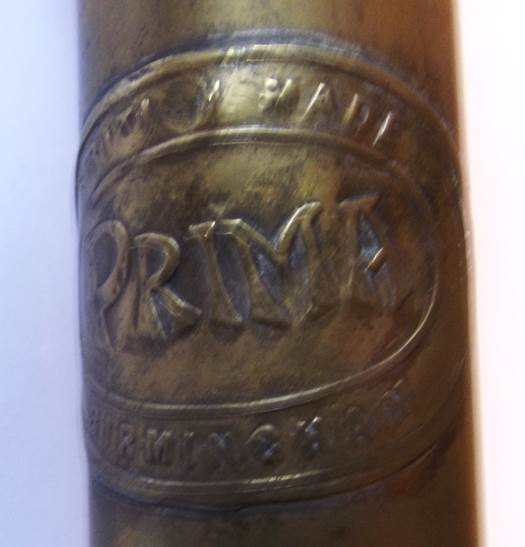 Maker’s plate on the pump