Beer is made, in part, from malt. Malt is barley which has been allowed to germinate and sprout for just the right amount of time.

Traditionally barley was first steeped in water, maybe for a couple of days. This barley was then placed in large boxes to a depth of about 30cm where it started to germinate and generate heat. In this labour-intensive process the barley was then spread on the malthouse floor to a depth of perhaps 15 cm (it depended on temperature). The sprouting barley was turned regularly and gradually spread more thinly over the floor.

When the maltster considered the time right, the barley, complete with developing root and shoot, were transferred to the kiln and another carefully controlled process began which killed off the living plant and aimed to produce the right colour and flavour for the beer.

Market Lavington once had many of these malthouses. Barley grew on Salisbury Plain and its conversion to beer began in the local malt houses.

All have now gone, but one building survived into the mid 1970s. It was behind number 38 High Street. 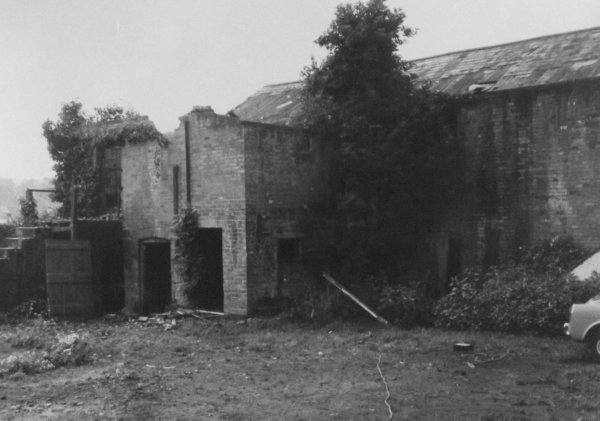 Former malthouse behind 38, High Street, Market Lavington. The little bit of car the photographer included shows the substantial nature of these buildings.

The malt trade had long since departed from this area but the building proved useful. The malt house needed a large, flat, sturdy floor. It proved highly suitable as a makeshift dance hall. But before the 1970s better transport had carried dancers away to the towns. The building fell into disrepair and was demolished.