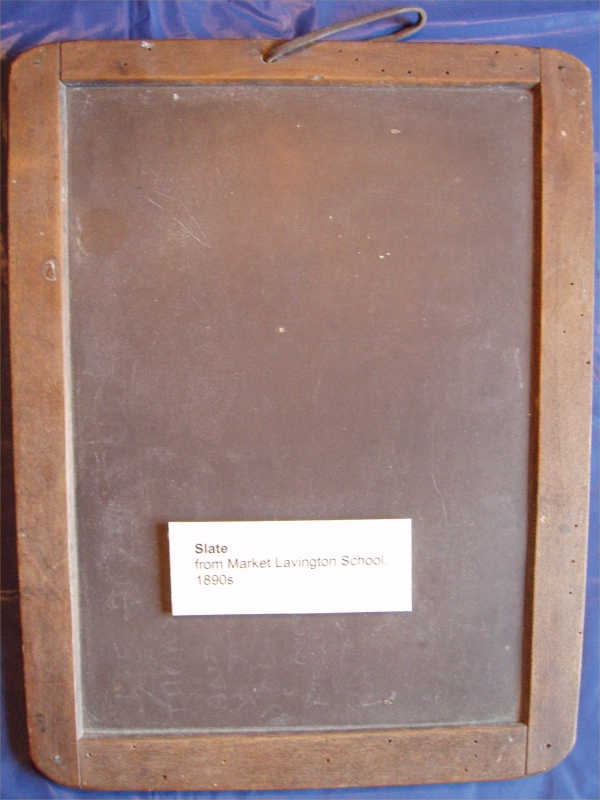 People in the older generations from all across the country will remember using slates as school. They made a lot of sense for some work. The pages in an exercise book could only be used once but work – done on a slate could be checked and then rubbed off so that the slate could be used again. For example, the slate was perfect, for arithmetic practice or for spelling tests where, once a teacher had seen the work it was no longer needed.

The writing implement used with the slate was a piece of hard chalk. Users will recall the horrible squeaking  noises made as the chalk was pushed over the slate. Wiping the boards clean, with a dry rag, could produce clouds of dust.

For some reason the slate fell out of favour as the twentieth century progressed.

The old idea, though, is finding favour in 21st century schools, but now the young students use a small white board and a dry wipe pen.

Our slate was used at market Lavington School (now the Old School) and dates from the 1890s.

Observant lookers will note that the wood frame has woodworm holes. This is not active, but if it were we would be able to send it to The Wiltshire and Swindon History Centre in Chippenham where the conservators would put it in a deep freeze at -30 degrees Celsius for about a week. This low temperature defeats the furniture beetle in all its stages of life.