An unlikely find in a Drove Lane garden

An unlikely find? Yes, it does seem surprising that a button from Somerset turned up, many years ago, in a Market Lavington garden.

The item we look at today is not a recent metal detector find, rather it was found some 25 years ago – maybe more – and given to the museum back then.

The item is a button, and we know little about it, apart from the inscription on it. 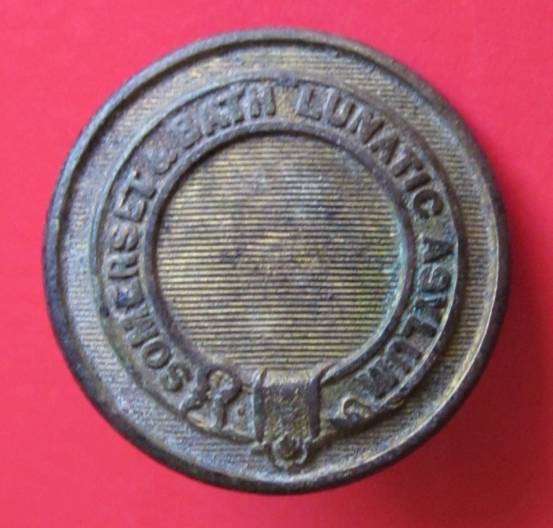 As we see, the button, which has a metal loop on the reverse for sewing it onto a garment, is marker, ‘Somerset and Bath Lunatic Asylum’

The land for the site was purchased in 1844 and a competition was held to design the structures. The builder was Mr Kirk of Lincoln. The stone was quarried and dressed on site and the lime burnt close by. The asylum was originally called ‘Somerset County Asylum for Insane Paupers’. The asylum opened in 1848 and housed 350 patients. The establishment was intended to be largely self-sufficient and had its own water supply, gasworks, smithy and sewage treatment as well as farm. More land was bought and leased over time until the site was 307 acres in extent. A separate hospital block to the northeast was built in 1867 to house 30 female patients.

The original design of the site included ‘airing grounds’, gardens for the various categories of patients. There was also an apothecary, plumbers shop, shoemakers shop and brewhouse. In 1854 ‘Besides attendants there is an engineer, a bailiff, a gardener, an assistant gardener, a carter, a cowman, a baker and a brewer, a cook and a porter’. In 1876 there were 668 beds, twice the original intended capacity. In 1927 the site’s gas works became redundant when the hospital was connected to the town’s supply. Electric lighting was installed in 1928. {5}

The buildings were demolished or converted for other use in 2006.

http://www.ukdfd.co.uk/ukdfddata/showrecords.php?product=31877&limit=recent&date=1122150535
shows a similar button and suggests it is late 19th or early 20th century.

None of this explains how the button came to be found in a cottage garden on Drove Lane, Market Lavington. The Market Lavington area, had its own private asylum at Fiddington and the Wiltshire county asylum was at Roundway, Devizes.