Just over a month ago we published a sales brochure for a house in Easterton, now known as Willougbys. (click here) The brochure refers to a story that Oliver Cromwell stayed at this house.

A single, small, typed document has just come to light and that refers to this incident as well. 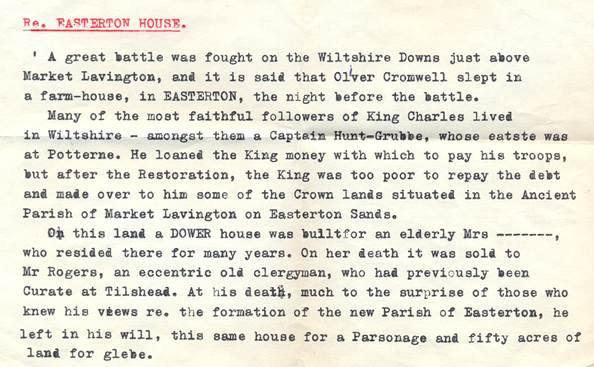 Document about Easterton House which refers to a possible civil war incident in the Market Lavington area.

This document, as can be seen, is about a house in Easterton called Easterton House which was once used as the Vicarage for the parish. We have no reason to doubt what most of this document says. It is the first paragraph – a kind of preamble to the main focus – which refers, again, to Oliver Cromwell.

It says, ‘A great battle was fought on the Wiltshire Downs just above Market Lavington and it is said that Oliver Cromwell slept in a farm house, in Easterton, the night before the battle.’

We would really like a historian who knows to confirm or deny this story of a battle on the downs above Market Lavington. Of course we are only about 6 miles from the site of the Battle of Roundway but surely nobody would describe Roundway Down as ‘above Market Lavington’ when it is the other side of Devizes.

Any help or ideas on this would be gratefully received.