Animal crackers are really little cracker biscuits shaped like animals. It was back in 1935 that little Shirley Temple sung about ‘Animal crackers in my soup’ but the real things predate that. Indeed, the Marx brothers made a film called ‘Animal Crackers’ in 1930.

And here in Market Lavington we had our own Animal Crackers in 1986. They were, actually, a group of young ladies who took part in what was then the annual barrel rolling competition. In the way of newspapers (and maybe blogs too) this quintet were chosen for a newspaper photo which we can find in a cuttings scrap book at Market Lavington Museum. 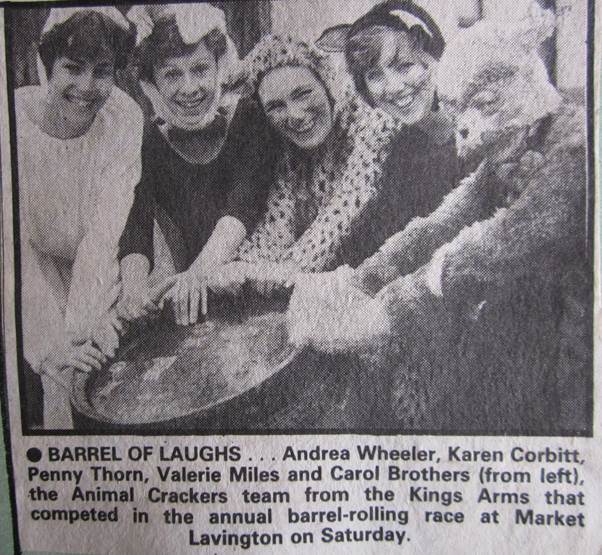 Animal Crackers – a news photo from 1986

So here we see the girls dressed up in their animal finery, all ready to start rolling out the barrel. They are Andrea Wheeler, Karen Corbitt, Penny Thorn, Valerie Miles and Carol Brothers and they were representing the Kings Arms public house.

This reminds us of how much the licensed house or pub trade has declined. When there were four pubs in the village, it seemed natural to have some inter-pub rivalry and the old barrel rolling competition was part of that. Now we just have the excellent Green Dragon. There is no competition and a little tradition has gone from the village. Not that it was a truly old tradition. You can click here to read a little history of the event.

And what about those five young ladies who made up the Animal Crackers? Where are they now?