Back in 2011 we were given some photos of members of the Crassweller family by a lady called Jan. One of the photos she gave us was actually a street view and that’s what we are looking at today. 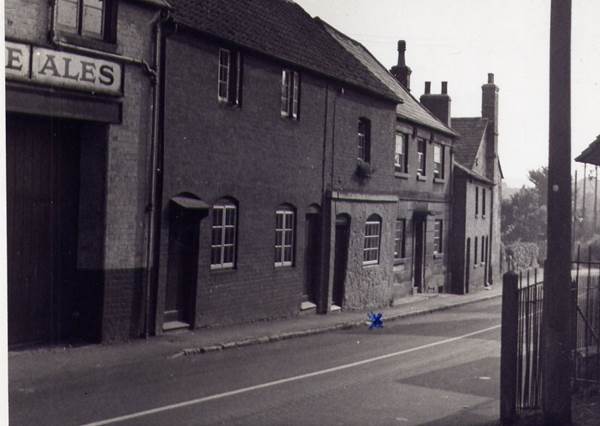 This is Church Street. In fact the church would have been to the right of the photographer as the image was taken. The blue X clearly marks the spot. This was Anne’s Cottage where Mrs Eleanor Phillips lived. She was a Crassweller by birth.

We can’t be certain, but we suspect the cottage name was given by Mrs Phillips. She and her husband, Fred had previously been at Anne’s Farm above Northbrook where Fred had been a chicken farmer. We think Eleanor took the name when she moved after her husband’s all too early death.

Let’s move to the right hand side of the road where we can see some iron railings and the corner of a roof. That roof is on the bier house where the elegant trolley for moving coffins up to the church is kept.

At the extreme left of the photo we have a beer house. In those days it would have been called The New Inn but an inn has overnight accommodation and when that ceased at this establishment the name was changed to The Drummer Boy. The pub closed in 2014.

Just beyond Anne’s Cottage is a house called Platencia. This was once the home of a pair of Hiscock ladies. At the time of writing this building is being gutted and renovated.

At the far end of that apparent terrace, sideways on to the road is Spring Villa, childhood home of our museum founder, Peggy Gye.

We have no date for the photo but we note an absence of vehicles and television aerials so we date it to before 1953. It was the Queen’s coronation that persuaded people to purchase their first TV set. The area hasn’t changed much as this similar shot shows.

Eleanor had some of life’s setbacks to cope with. Her only child died in infancy and she was a widow in her 30s. She threw herself into village life and was obviously much loved by nephews and nieces.