Peter Merritt recently visited the museum from his home in Leicestershire. He’s a working man so made use of the Easter holiday weekend and made an arrangement with us to be open. (If you need to visit outside our normal opening times do ask. We’ll try hard to oblige.) He brought photos with him showing family members who descend from our Market Lavington Merritts.

If there was one trade the Merritts were particularly involved in it was blacksmithing. They had their forge close by Broadwell in Market Lavington and served the local community.

Let’s start the story in 1851 when John H Merritt was head of the blacksmithing family at Broadwell. He and his wife, Mary Ann, had 8 children of whom the oldest, Robert, was already a blacksmith. We know his next son, another John H Merritt followed his father into the business and we also see a nephew, James Henry, lived with this family and was a blacksmith.

Other sons of John and Mary may well have trained as blacksmiths but were not all able to find employment or work in Market Lavington. Thomas, born in 1846 may have been one of these. He is the direct ancestor of our visitor, Peter.

By 1861 Thomas, now 15, is a blacksmith and still living at Broadwell with his dad – so presumably working for him. By 1871 Thomas had married a Bristol girl and was living in the St Paul’s district of that city and working as a blacksmith.

Their son, another Thomas was born in 1873 in Bristol, but it’s a fair bet he was a visitor to Market Lavington from time to time to see his family. We have a photo of him, with descendants, to give an idea of what these Merritts looked like. 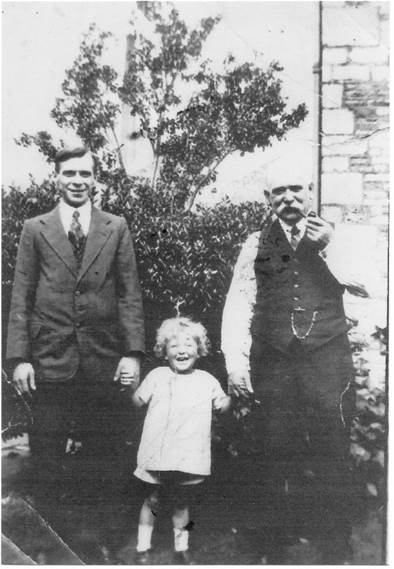 Thomas Merritt with son and grandson. Thomas’s father was a Market Lavington Merritt.

Thomas born in 1873 is on the right. His son, George is on the left and grandson, Arthur, born 1922 and dressed as many boys were back then, is in the middle.

It’s a lovely family photo of descendants of Market Lavington. Members of this family have been able to make use of our resources to help trace their past and I think they were really pleased we were able to introduce them to relatives still in the village.