Another view of Kandy Cottage

How splendid to come across another photo of a forgotten scene in Easterton. It can be hard to explain just where a vanished building stood. Perhaps this view will make it clear. 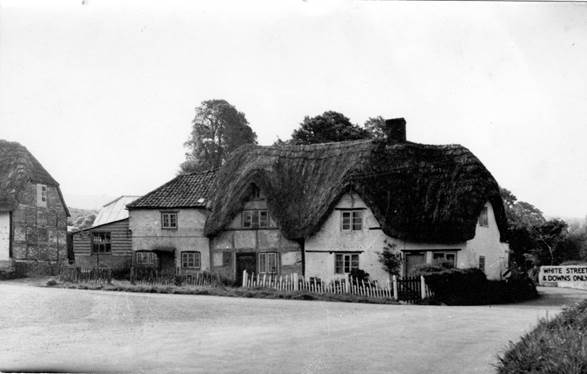 The sign on the right, which reads ‘White Street and Downs only’ stood outside Manor Cottage. That still stands and has recently had a face lift. The sign, of course, pointed straight up Easterton’s White Street.

The road we see curling round the old thatched dwelling was the road leaving Easterton and heading for Market Lavington. Planners decided it would be better if the old dwellings were demolished and the road was straightened. And that is what happened. The attractive cottages were swept away and now only exist in the memory and on old photos.

A part of the thatched building had once been a bakery. When Jim Sheppard first came to Easterton, it was this bakery he occupied. Later he moved to newer premises a bit further along Easterton Street.

Another part of the building was once known as Kandy Cottage for that common reason Ken AND Yvonne lived there – K AND Y.

At the left of the photo is a bit of the Court Close farmhouse and that still stands.