Archibald Baker and a 1920s Carnival

Back in the 1920s and the 1930s, the carnival was something of major importance in Market Lavington and Easterton – and probably elsewhere as well.

This was an era when the wireless was in its infancy. The early station, London 2LO started transmissions in 1922 and that was for just an hour a day. There was no TV at all until 1936 and that was very limited. In the 1920s, even going to the cinema meant watching a silent movie. No wonder home made fun was important to people for, basically that was all there was.

But the carnival had a higher purpose as well in our villages. It was used to raise money to enable those in need to have the services of a doctor or even a hospital. There was no National Health Service until 1948.

In fact, in Market Lavington and Easterton, the carnival was made a part of Hospital Week with all sorts of events to raise money.

Today we are looking at a part of a carnival procession as it passes along Church Street in Market Lavington. 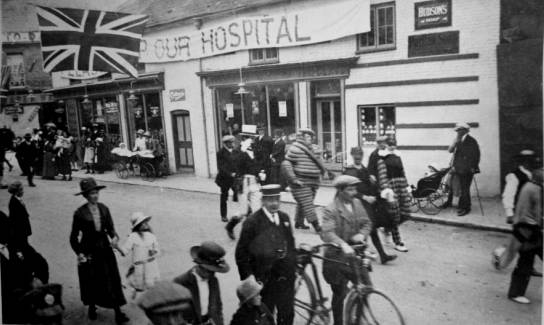 Of particular interest is the chap in the middle who looks to be dressed up as a Michelin Man. That man is Archibald Baker and we’ll come back to him. But lets have a look at the general scene first.

The shop our Michelin Man is passing is no longer a shop. For many a year it was the photographic shop of Peter Francis. We think the sign above the window says Ironmongery : China : Glass. There appear to be wooden battens fitted to the wall this side of the door. We don’t know what they were for but perhaps items for sale were hung on them.

The long sign above the shops is partly hidden by the Union Flag. It reads, ‘PLEASE HELP OUR HOSPITAL’

Behind the Union Jack we are looking at the corner of White Street where part of a sign is telling us that Mr Walton’s stock is up to date.

But back to Archibald Baker. We knew it was him in the photo because we have another image of him in that odd costume. This was given us by members of the Baker family. 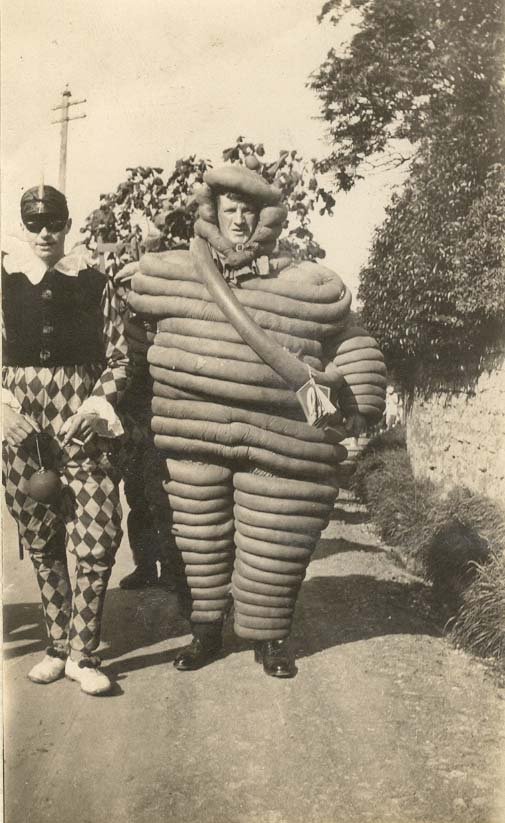 Archibald Baker is the Michelin Man. an anyone identify his friend?

There’s Archibald again with, maybe, a pierrot on HIS right. That person is also in the picture on Church Street so this is surely the same day. Unfortunately, when we were given the photo no members of the family knew just what Archibald was dressed as.

But to be fair to Archibald, he could look normal, so here he is again. This is a World War One photo. Archibald was a Sergeant. 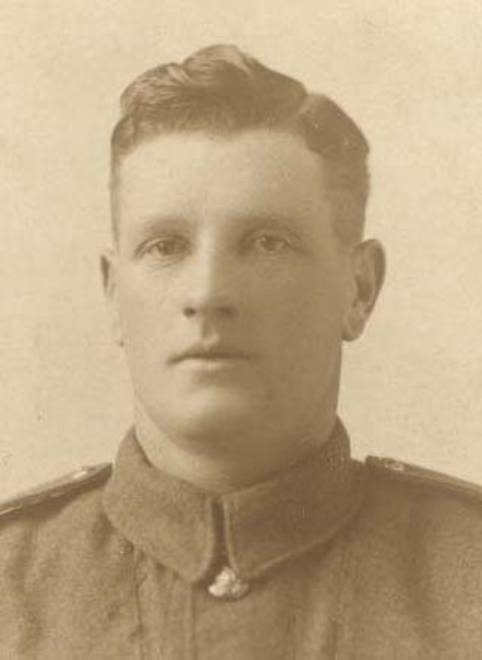 Archibald was born in 1888 in Market Lavington where his father, John, was a tinsmith occupying the premises opposite the Co-op and next to Woodland Yard. Archibald was the sixth of ten children born to John and his wife, Louisa.

By 1910, both of his parents had died. Some of his sisters emigrated to Canada. Archibald had married Emily Burton in 1909. In 1911 Archibald, Emily and baby daughter Louisa Emily lived on Church Street in Market Lavington. Archibald was a bricklayer.

Muriel W Baker was born in 1917. (Another photo we have talks of a Mabel as a daughter of Archibald)

Archibald obviously lived locally for he took part in the carnival. But our museum records suggest he was not actually in Market Lavington or Easterton.

It would seem that Archibald died in the Christchurch area in 1955. At that time, Christchurch was in Hampshire.