Arthur Harvey Lodge was born in Devizes during the last quarter of 1894. We believe the census enumerator has given him the name Harry on the 1901 census – if so, he lived at 28, Bath Road, Devizes (in Rowde parish) with his father, William who was a gardener and his mother Selina and a younger sister called Ellen.

In 1911, the census, self-written by occupants, leaves no doubt that Arthur Harvey Lodge lived at 28 Bath Road, Devizes with gardener William and Selina. A new younger sister and two younger brothers had been added to the family.

Bath Road, Devizes would have given the young Harvey (he seems to have been known by that name) the chance to see much transport. The Kennet and Avon Canal is parallel to the road so Harvey would have seen boats taking a whole morning to make their way up or down the 28 locks of Caen Hill. He would also have seen the GWR trains struggling up the parallel 1 in 52 gradient, which is steep and slow in railway terms. And no doubt he’d have also seen early horseless carriages on the Bath Road. Perhaps he was impressed with their ability to make light work of the incline up to Devizes from the west.

Harvey married Nellie Sharpe in 1918 in Devizes. At that time – the end of the First Word War – surplus army lorries were available. Was it then that Harvey set up his transport business?

A photo in Market Lavington Museum shows Harvey and his two drivers with their lorries in 1935.

The three men are named as (from left to right), Mr Whitbread of Devizes, Jack Romaine of Urchfont and Harvey Lodge of Market Lavington. The lorry doors tell us that the company was A H Lodge and Son, Cattle and General Hauliers, Lavington near Devizes, Phone Lavington 43.

At this point can we thank Harvey’s daughter who sent us the photo along with two of Harvey’s works diaries from 1952/53. The entry for 30th May 1952 has a rather chilling entry to start with. 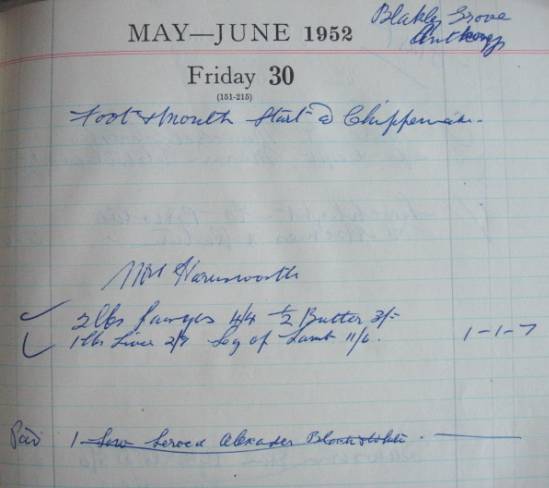 Harvey Lodge's diary entry for May 30th 1952 records foot and mouth disease at Chippenham. The diaries are held by Market Lavington Museum.

Was that foot and mouth restrictions starting at Chippenham? There certainly was an outbreak of the disease in 1952 and one imagines it might have had a big impact on Mr Lodge’s business.

Arthur died in 1973. The death was registered in the Devizes area.