The Edington Gardens were a popular venue for trips out from Market Lavington in pre motor vehicle days. It was far enough away to be an adventure, but not beyond the reach of horse powered vehicles or even on foot.

Large numbers of people went on church treats to Edington, particularly from the Congregational Church.

Here we have a group of people relaxing and posing for the photo in the garden. 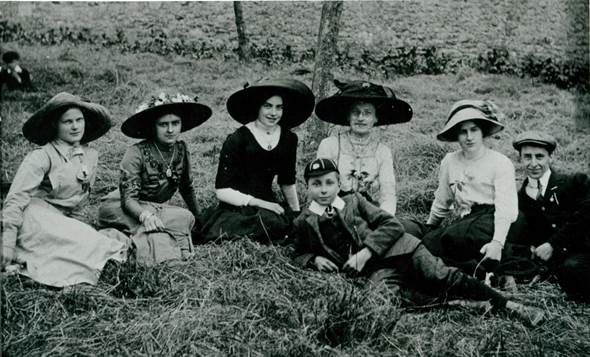 This picture dates from about 1911 and shows a group of people, clearly dressed up in their finery. Sadly, we have no names!

The chap on the right looks to be getting quite pally with the lady next to him. The other chap looks far too young to be of interest to the ladies, all wearing their large hats. We may not have names, but the picture brings to life the simpler and less frantic lifestyle just over 100 years ago. It was a time when sitting on the grass with friends was a real change from much of the daily grind of life. Do remember these happy and contented looking folk had no transport beyond a bicycle (unless they were very rich and quite pioneering). They had no electricity in their homes so cooking or heating water was a slog, let alone doing all the washing by hand and then the ironing with flat irons. They had no mass media apart from newspapers – no radio, no TV and, of course, no internet.  They had no method of producing music unless they played it themselves – again, a few might have had a gramophone but they wouldn’t have been common.

This all meant the day out at Edington was a real break from routine and a chance to relax with friends and family.

Update: The lady third from the right in the black hat and the light coloured blouse is Olive May Borer, known as Joey, who later married Owen Loe in 1915. Her father was John Thomas Borer, Master Baker, who had a bakery in Littleton Panel. (With huge thanks to Rosemary)