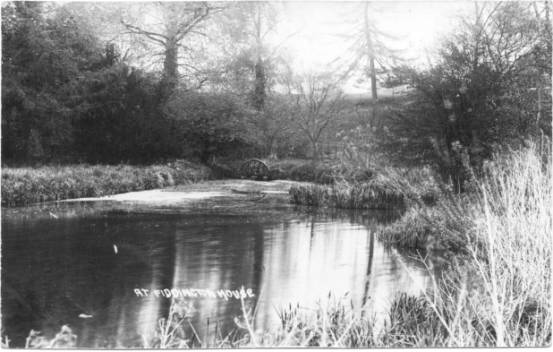 This photo was one of many taken by professional photographer, Alf Burgess in the early years of the twentieth century. It shows the pond at Fiddington House.

In 2010 there is no pond and no Fiddington House, but 100 years earlier, Fiddington house was a thriving mental hospital and the grounds were often in use for village events.

By the 1970s, the asylum had closed and the house had been demolished. The Fiddington Clays housing estate had been built and the pond levelled. One part of the grounds became a children’s play area and that, after recent troubles when asbestos was found, still exists. The pond was at the edge of this area and there are even plans to reinstate it.

We’d love to know more about life and times at Fiddington House. Do please get in touch if you can help. We know there are descendants of Fiddington House staff still in the area.