At Market Lavington School in 1943

1943! It was part way through the Second World War, but life went on reasonably normally for the children of the village. Of course, it could not be entirely normal, with many dads away and with extra, evacuee children in the village. But there was always school where the youngsters, under the watchful eye of Mrs Elisha, could learn important life skills.

They had no National Curriculum with testing at Key Stage 1 and 2. Of course, they learned to be literate and numerate but they also had the opportunity to learn from activities that could help to keep the food supply going at a time when rationing was severe and food was short.

Mrs Elisha, formerly Miss May Potter, was a country girl, born and raised in Market Lavington so no wonder she felt at home coping with livestock. The Village School had a Young Farmers’ Club but Mrs Elisha’s infants were too young to be members. This did not stop them from learning some animal husbandry skills from her.

This picture, a part of the Market Lavington Museum collection, was taken in June 1943 and shows Mrs Elisha near the shed with the goats. Children are with her with a mix of pets and small livestock. The houses in the background are clearly those of the Alban Estate along The Spring in Market Lavington. Did Mrs Elisha need to do a risk assessment to take the children out of the school? One imagines not. 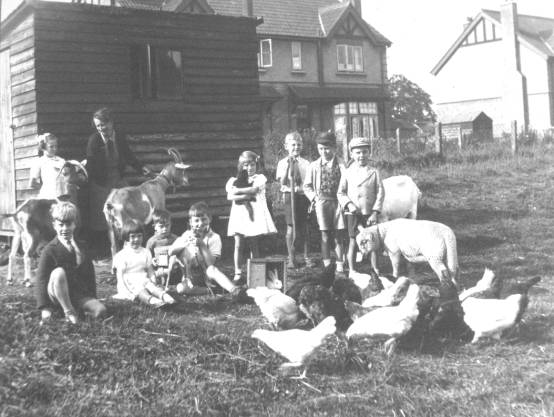 The picture was used in The Farmers’ Weekly magazine in June 1943.

Caption used with photo in Farmers' Weekly in June 1943

Until recent years, many schools in Wiltshire, including the comprehensive school in Market Lavington, had school farms. Such institutions do not seem to have a part to play in present day education.