Photographs do only provide a snapshot – an instant in the life of a person or place. But we think we can be fairly sure in saying that Mabel Sayer, wife of bus company owner Fred, loved dressing up and taking part in the carnival known as Hospital Week.

We have a number of photos of Mabel in various different costumes and each taken in a different year during that week when Market Lavington and Easterton raised money to support hospitals and those people who could not afford medical care. 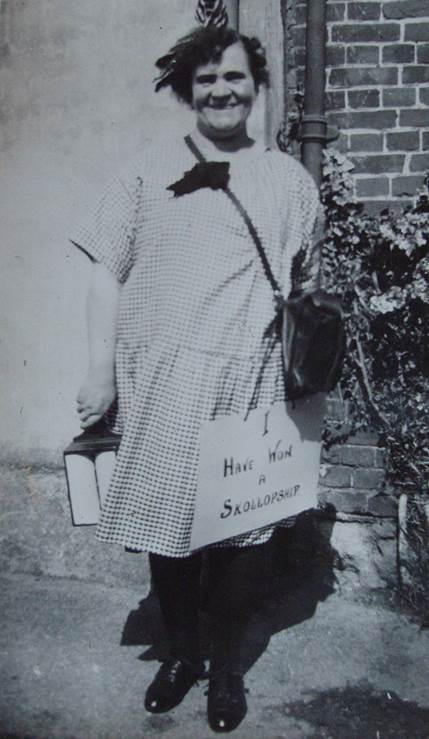 Mabel is dressed as a school girl. She carries a satchel over her shoulder and carries a notice to announce, ‘I have won a skollopship’.

These snapshots certainly give a feeling of fun. Hospital Week had a serious purpose, but was a week to let your hair down and enjoy yourself.

Mabel Weston had been born in Bath in about 1880. She married Fred in about 1900. The couple had one child. The family moved to Market Lavington in about 1912 and later retired to a nearby bungalow. We lose track of Mabel after the death of Fred in 1934.