At the Vicarage in the 19th Century

It is so good when things come together and you can start to get a bit more understanding.

This story had better begin in 1983 although it concerns the Vicarage in Market Lavington 100 years or so before that. It was in 1983 that a piece of paper, with some limited information was sent to or maybe given to Peggy Gye, our museum founder.

When the museum was founded – it opened in 1985 – the piece of paper became part of the collection. It contains a photocopy of a sketch of the vicarage. 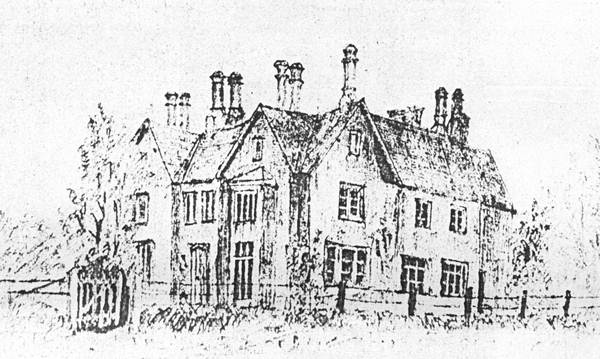 Sketch of the Vicarage in Market Lavington dating from about 1880

In addition there is an attribution, giving the name of the artist.

The artist is said to be Francis Hamilton Northesk Wilson

This tells us that the drawing was by Francis Hamilton Northesk Wilson of home he lived in England.

But who on earth was the artistic Francis Wilson?

A clue came from a correspondent who wrote:

Rev Frith is not a direct ancestor of mine, but his wife, Maria Sankey Frith, was the sister of my paternal great-great grandmother Henrietta Sankey Wilson. My great grandfather, William H. Wilson, was the son of Charles Watson Wilson and Henrietta Sankey Wilson. He was born in Meerut, Uttar Pradesh, India in 1863. Charles W. Wilson was a military officer and, unfortunately, Henrietta died with the birth of their last child, Violet, about 1877. Unable, or unwilling, to care for his many children, Charles sent them to live with the Friths at the vicarage in Market Lavington. The 1881 census record of the Frith household includes those Wilson children living at the vicarage. My great grandfather, William H. Wilson, is listed among them as age 17 and a Seaman Apprentice in the Merchant Marine.

For the record, it seems that the much travelled William Wilson eventually settled in Texas in 1889, after surviving a shipwreck near the Falkland Islands.

Unfortunately, we can find no trace of Francis Wilson ever living in Market Lavington but maybe he was a brother of William who missed out on written records for some reason. We do know that William had a sister called Frances who lived with the Friths at the time of 1881, 1891 and 1901 censuses.

And while we haven’t traced Francis our correspondent has. It seems that Francis was the older brother of William. We also know that the people who sent the sketch to our Peggy were the granddaughters of Francis and that they died a few years ago.

A mystery is solved.