1944 was 70 years ago so it is reasonable to assume that any surviving members of the Market Lavington branch, from that era, will now be in their nineties. The Second World War was still in full swing. In the second half of the year London came under attack from the V1 flying bombs and then the V2 rockets. But that probably seemed quite distant from rural Wiltshire, where the local WI still met. And here is the programme for 1944. 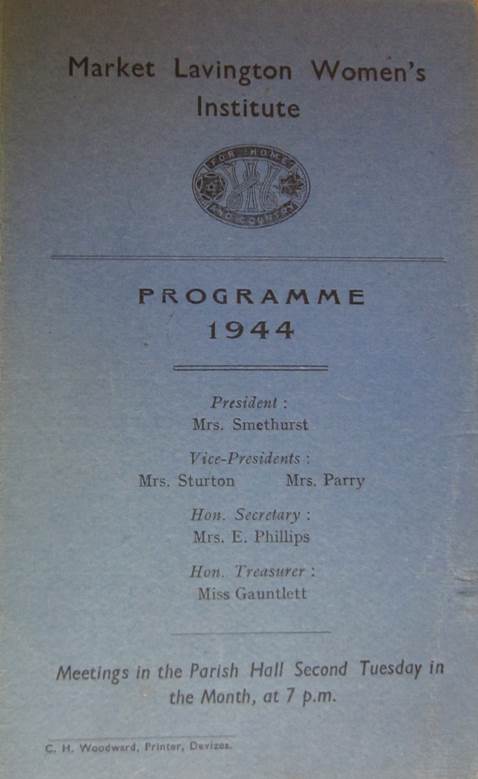 The front cover gives us the year and tells us who the officers were and when the group met. The programme is on the inside.

Each month has an apt quote and then members were reminded of the day of the meeting, what the subject of a talk might be and any other vital information.

For January various local people were to form an impromptu brains trust. There was a mince pie competition and entertainment in the form of games.

In February, instead of a talk, there was a questionnaire on water and sewage. Members who competed were to have made an apron from an oddment.

April saw a talk on The Medieval Village and members brought in the oldest thing in their house for an exhibition.

May was internal business as the agenda for the National Federation was discussed. But our local members competed over a shopping bag.

In June the Reverend Basil Phillips spoke on India and Ceylon. Members competing made slippers.

July had a speaker but no topic given. Roses formed the competition.

The members held their summer flower show in August and the only information for September is appropriate to the era of rationing. The competition was for a dried egg dish.

October was called the Members’ Evening but in November there was another talk as president, Mrs Smethurst offered her ‘Aids to Beauty’. Members made a button hole.

December was for in house business with an exhibition of quaint household objects.

What a lovely record of how some of our ladies lived during the dark days of World War II.