For some time we have tried to link our local Mullings family – the basket makers – with other Mullings in the south of England. A lead in this task comes with a postcard of Australian troops in Market Lavington in 1916 – 100 years ago.

Australian soldiers in Market Lavington in 1916

It has to be said that the soldiers look a bit ragged in style. They are not marching in step. In fact they have seen the photographer (Mr Burgess) and are stopped and posing – all except the head tossing white horse at the back.

On the extreme right we see Mr Elisha’s tailoring shop. A young Elisha has the family dog jumping up at her. A close look reveals people in many doorways. Maybe it is Mr and Mrs Phillips at the former hardware shop. A sign on the arched entrance to what we now call Woodland Yard advertises a car for hire near the Market House. It’s a fascinating glimpse of times 100 years ago in Market Lavington. But the back has a story to tell as well. 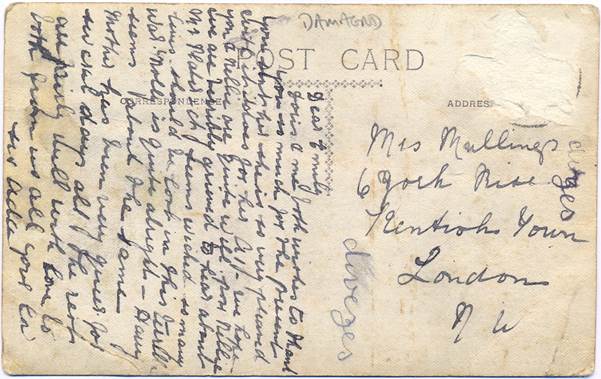 First of all, as often happened, a stamp collector has removed the stamp and with it the post mark. But the recipient is clearly Mrs Mullings with an address in Kentish Town, London and the salutation is Dear Emily.

Emily Mullings was born in 1872 as Emily Ford. She was born in Easterton where her dad was an agricultural labourer. In 1895 she married Henry Mullings. Henry was a dozen or so years older than Emily. He had been born in Devizes but by 1891 he and his parents were on High Street in Market Lavington. His father, William, was a basket maker.

So we can happily link our basket makers with this family.

But let’s read the message, 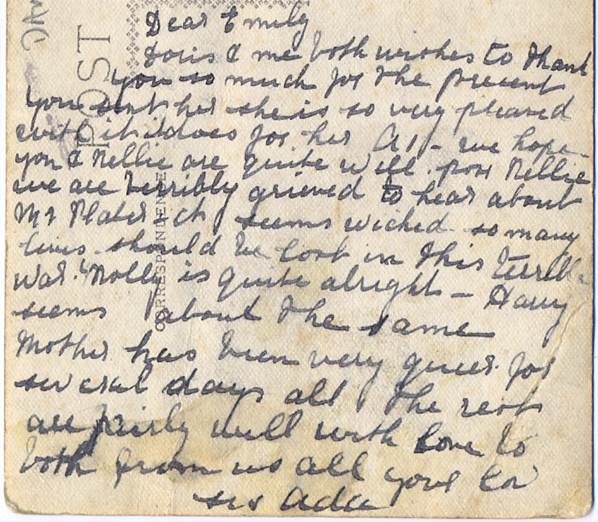 It is clearly from Ada who sounds to have a daughter called Doris.

This was sent by Ada Hopkins who was actually Henry Mullings’s sister. She did, indeed, have a daughter called Doris.