Every now and again we get a bad winter. People over 70 may recall that 1947 was particularly bad. Those over 60 will remember the ‘Long Winter’ of 1962/63 whilst those who are young may end up remembering the winter of 2013/14. Some people seem to be predicting a harsh winter this time although we are cynical and wonder if it isn’t just politicians trying to score points off one another.

However, today we are looking at another winter which had its moments back in 1982. Those readers in the older generation may just blink in near disbelief when we remind them that this was more than 30 years ago. And it was then that local resident Ray took a colour slide near his home – Yeoman Close in Market Lavington. 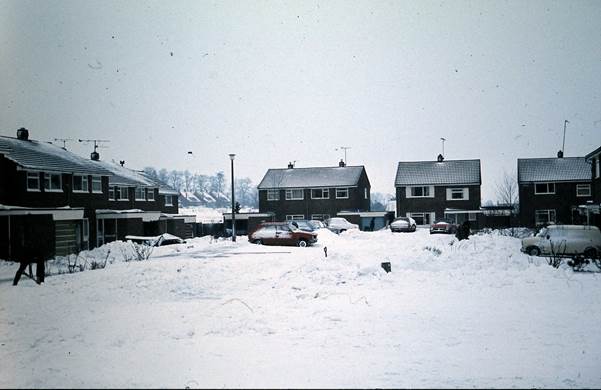 The 1982 winter as recorded in Yeoman Close, Market Lavington

What a delightful photo and it tells us about life those thirty plus years ago. There seems to have been a lot of snow if we judge from the piles of it that people have moved. Yet the houses are thinly covered and that suggests a lack of decent loft insulation. The covering, though, is even, which indicates central heating. You can compare with the older houses in the background which all have more snow on the roof. We suspect those houses were not so well heated.

Virtually every house has its ‘BBC2’ or 625 lines TV aerial.  Back then we only had terrestrial TV. And it was in November 1982 that we got a fourth channel choice when channel 4 started.

There are cars and vans on drives, but it seems to be pretty well one vehicle per household. These days two might be seen as normal and more cars per house are not uncommon. Children tend to live at home for longer so it is perfectly common for mum, dad and a couple of young adult children all to be occupying car space outside one house.

Now we bet that when Ray took that photo of snow back in 1982 he didn’t realise that he was also recording a bit of social history.