It is surprising what can turn up and get given to a museum like ours. The latest arrival is a nearly 90 year old account sheet and book from Market Lavington Prize Silver Band. Only the first couple of pages were used for accounts. Other pages were used by John Merritt, band leader, as an aide memoire to getting the band tuned up.

Here’s the front of the book.

The original plate on the front of the book has been overwritten by John Merritt because he has copied J Ord Hume’s tuning instructions into the book.

This page appears to deal with 1924 and 25 and it looks at the bank assets of a band which seemed to be doing very well financially.  The balance in the bank on 25th July 1925 was £86=7=8d. Using even the lowest inflation equivalence formula this equates with more than £4000 in the bank today.

As we understand the band owned most of the instruments and the uniforms, it would seem it really did do well back in those days.

How wonderful to have this record.

The book then has John Merritt’s handwritten band tuning instructions. 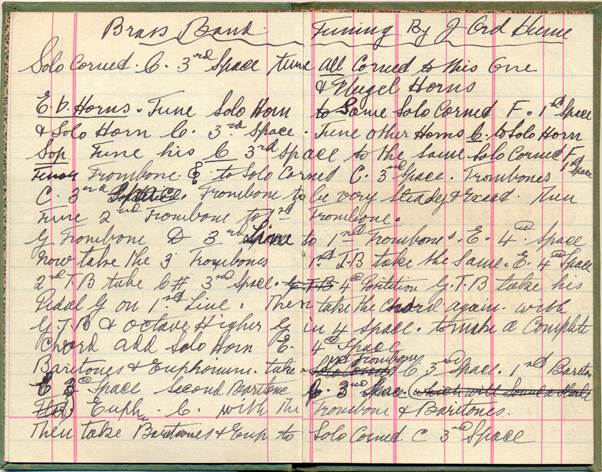 Interesting to see, but seemingly quite technical – and this is the first of a couple of close written pages.

The book continues with alternative fingerings for a number of notes on different instruments.

John Merritt was bandmaster for 60 years. No doubt he needed to know what was possible on different instruments.