When the sport of barrel rolling was reintroduced into Market Lavington, it was hoped to use a course along the main street, between The Green Dragon, passing by the Kings Arms and The Volunteer, and ending up at The New Inn. Present day residents might only recognise one pub name there – The Green Dragon – but the New Inn still exists under a new name, given in the 1970s – The Drummer Boy.

Unfortunately (or maybe not) the police would not countenance the closure of the main road for this event so a course was laid out on White Street with stations, the right distance apart for the four village pubs of the day.

We believe the event was actually restarted in 1971 and we have a photo from that year and 1972 and 1973 on this blog. Click here to see them.

Today’s picture dates from the 1970s. We do not have the actual year. It shows a barrel and, presumably, a person in charge of it going past Broadwell. 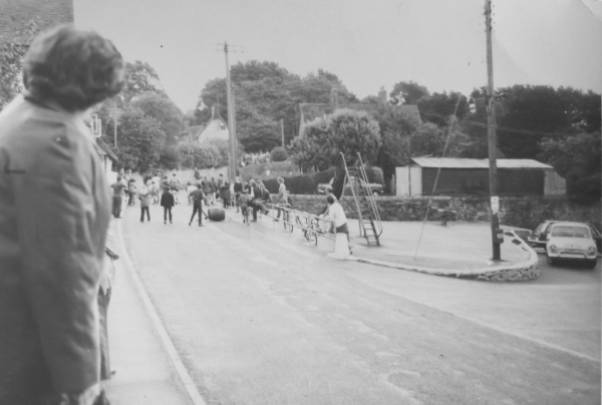 The nearer car parked at Broadwell appears to be a Ford Cortina. It would not have been in the first flush of youth when the photo was taken.

Let’s zoom in on the action. 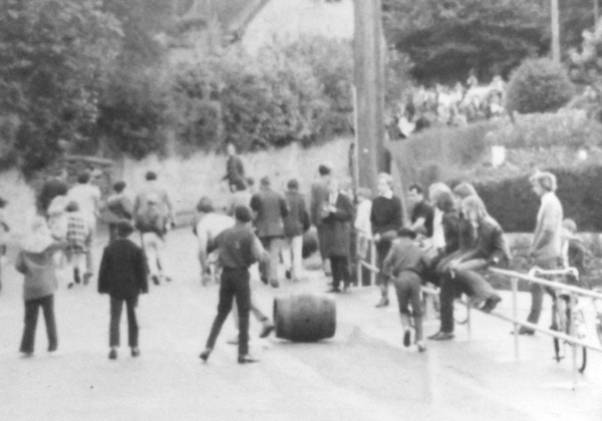 A barrel being rolled past Broadwell, Market Lavington

It would seem that the barrel we see well belongs to a back marker. There looks to be another barrel a little ahead. There also looks to be a large crowd as White Street changes course to become Lavington Hill.

Can anyone name any of the people in this photo? It won’t be easy, as most people are looking away from the camera.