Believe it or not?

Can we believe the written word? Often we can, but certainly not always. Today’s blog is a case in point.

We were looking through some old CDVs we had. CDV stands for Carte de Visite and they were quite a standard style of nineteenth century photograph. They measure 54 by 85 millimetres and were an ideal shape and size for a small full length portrait photo. They were exceedingly popular and it is no wonder we have quite a lot of them at Market Lavington Museum.

Here is one of them, a charming shot of two young lads. 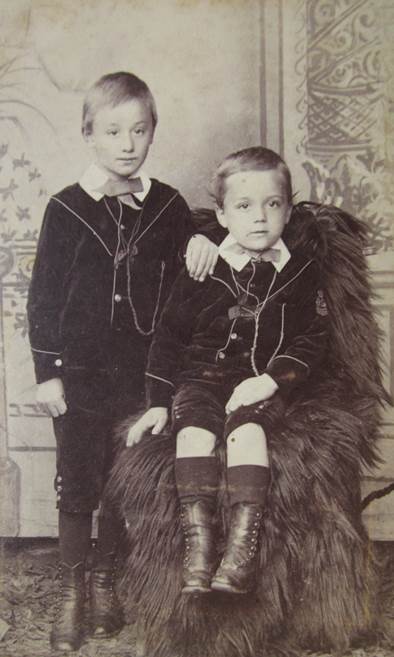 Our records do not tell us the names of the lads. Indeed, it is really the back of the photo which holds definite Market Lavington interest, 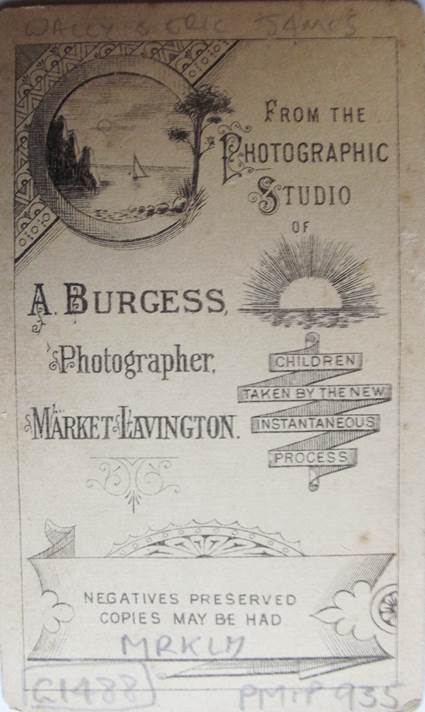 The photo is by A Burgess of Market Lavington

We’ll ignore that bit of hand writing at the top for a moment and consider the main features. Well straight away we can see that this was a studio photo by A Burgess of Market Lavington and that he could use the new instantaneous process when photographing children. He kept his negatives so copies could be made later. But actually, we can learn more from the general style of the back of this CDV. A wonderful website at http://www.rogerco.pwp.blueyonder.co.uk/time/time.htm allows us to date the backs of these old photos. From that we think this card dates to around the late 1880s and possibly into the early 1890s.

Now to that hand written bit at the top. It barely shows on the original CDV. The enhanced photo here makes it easy to read – Wally and Eric James. Presumably someone decided this was a photo of these two lads. There is certainly a similarity between the younger lad and another picture we have of Eric which you can see here.

But that photo dates from 1918. If this one is a similar age, it surely wouldn’t have been printed on 1880s card. We don’t think this photo can be Wally and Eric. But those brothers had a father called Walter who was born and raised in Market Lavington – born in 1879. He fits with the supposed age of the CDV. Sadly he had no brother called Eric. Walter’s brothers were Charles born in 1876 and Arthur born in 1885.

At present we have no way of knowing if those two lads are members of the James family. It will be a long shot, but perhaps someone out there in blogland can help.

Whoever the lads are we can admire the skills of our Alf Burgess, our Market Lavington photographer.