The job of bellows is to blow air. This could be for all sorts of reasons, but one was to help fires get going, or to make them burn more fiercely. Some people can doubt that a blast of cold air can help a fire burn, but it is just basic chemistry. For a fire to burn, oxygen is required. Additional air, which is about one fifth oxygen, enables more fuel to burn more quickly.

In these days of central heating, probably not powered by solid fuel, it is hard to remember the requirement for a good fire throughout the year. Kitchen ranges needed lighting, and they needed to get hot rapidly and room heating open fires were a fact of life. Virtually every home had a pair of functional bellows available to provide that vital draught for the fire. 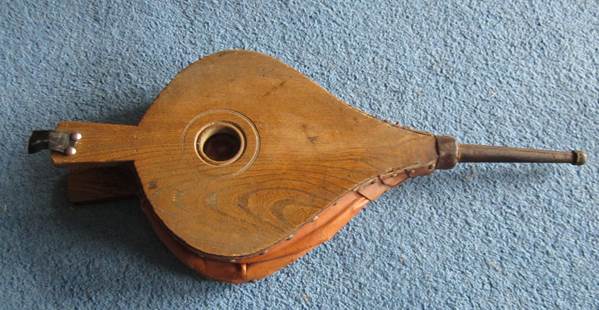 This is a fairly standard form for bellows. The main frame is of wood. There are two pieces and they are joined together by a piece of flexible leather. The ends of the frame are fastened to a steel pipe. The thin handle ends can be squeezed together and pulled apart. When you squeeze, air is forced through the pipe and at the glowing embers. When you pull the handles apart, the valve in one side opens to allow air in. 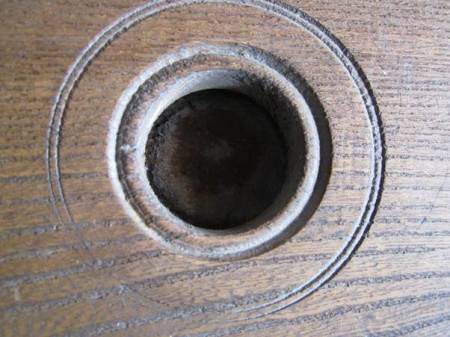 Leather flap valve in the bellows

The valve is no more than a flap of leather inside the hole in the wood. When you squeeze, pressure pushes the flap against the wood to close off the hole. On the pull stroke the flap just falls away and air gets in.

The leather that joins the frame is a bit like a concertina so that it can open and close.

The bellows bag is a bit like a concertina

So cunning and so simple and, of course, so effective for its purpose.

Of course, this pair of bellows, just given to Market Lavington Museum, has local provenance. They belonged to Mrs Rose Crouch who was born in the village (as Miss Hiscock) in the early years of the 20th century. She died in the 1980s and the bellows were passed to a neighbour who has just passed them to the museum.

We can’t date these bellows which have no makers mark. They may have been locally made.

Similar bellows can still be bought today. Often these are seen as decorative rather than functional.