The Honourable Mrs Louisa Hay was a member of the Pleydell Bouverie family. She lived for virtually all of the second half of the nineteenth century as a widow at Clyffe Hall.

The Gye family were builders, carpenters etc, and, to the delight of us these days, hoarders and keepers. As a result we have a bill submitted to the honourable lady in 1884. It provides something of an insight into the amount of upkeep a large house needed as well as to costs and wages roughly 130 years ago.

There may be just the one bill here, but it covers a period between July and December 1884. 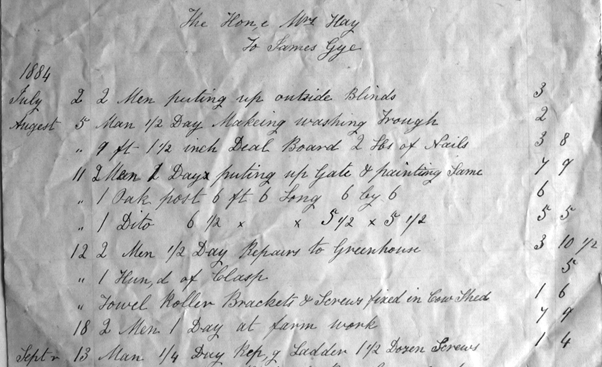 First part of 1884 bill for work done by James Gye for The Hon. Mrs Hay at Clyffe Hall

It is, perhaps, labour costs that strike us as being horribly low. Take that entry for August 5th – a man half a day making a washing trough is charged at two shillings. That’s 10p in present money. Actually, in terms of wages that’s equivalent to about £45 today – roughly £10 per hour to share between company and employee.

However, on August 18th we had two men for a day at farm work getting 7/9 or about 38p which is just marginally less than the trough digger earned for the company. 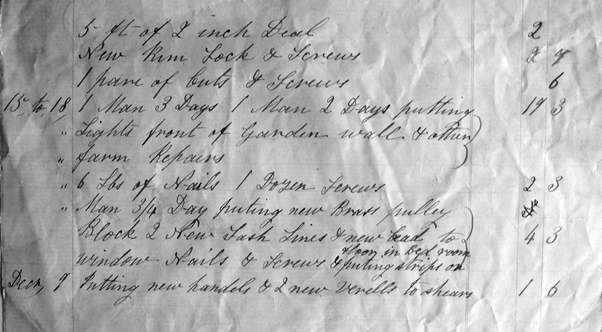 The last item listed here is amusing for it is something that just wouldn’t happen these days. A pair of shears was re-handled at a cost of 1/6. That’s about £32 in current labour value. Well you can pay much more than that for a brand new pair of shears in 2015 but you certainly wouldn’t have to. We think what are called verells we’d call Ferules – the iron covers on the end of the handles.