About a dozen years ago, a small metal token was found at number 9, High Street, Market Lavington. This token, value one farthing, was given to Market Lavington Museum. It seems time it saw the light of day, at least in photographic form. The following information comes from the web site – http://www.abccoinsandtokens.com/DH.Somerset.115.004.html although the pictures of the near perfect and well-cleaned example shown there have been replaced by our farthing at the museum.

Obverse: Crowned and bearded bust to left with bow and quiver of arrows over shoulder with legend: “BLADUD FOUNDED BATH”. 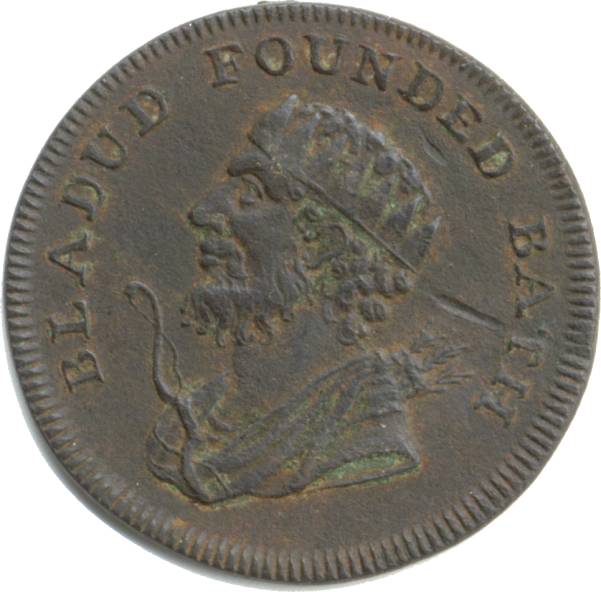 Reverse: The aforementioned crowned Bladud holding his bow and shield, driving two pigs or hogs with legend: “THROUGH HIS SWINE 1794”. 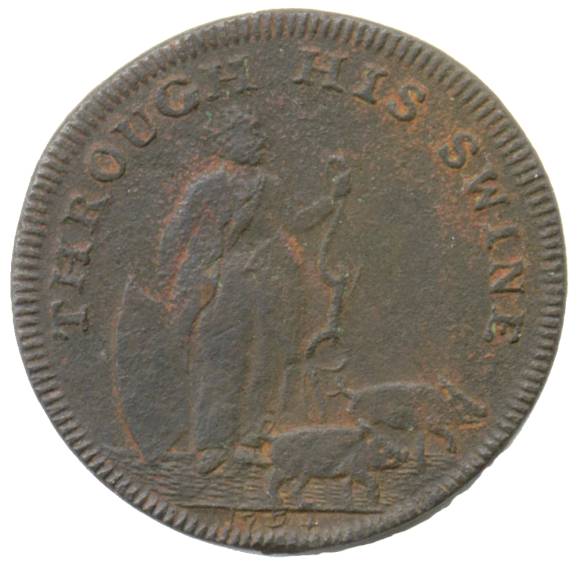 Reverse of token which shows Bladud as a swineherd

This was issued by F. Heath who was an ironmonger, brazier and cutler with a business in Bath. Bladud was the eighth King of the Britons who is thought to have founded the baths in 863 B.C.

Legend had it that Bladud contracted leprosy and was locked away. He escaped and took a job as a swineherd. His pigs contracted leprosy as well. His sick pigs wallowed in mud and were cured. Seeing this, Bladud also rolled in the mud and he, too, was cured. He went on to be the 8th King of the Britons. In gratitude he founded a city where the pigs had been cured – the city now known as Bath. Bladud dedicated his city to the Celtic Goddess, Sul. 900 years later, the Romans called the place Aquae Sulis.

According to legend, one of the children of Bladud was King Lear – made famous by the Shakespeare play.

Francis Heath, the issuer of these and other coins, has not been clearly traced. He carried on his ironmongery, cutlery and brazier business, just previous to 1800, at number 2, Bath Street.

How this token came to be in High Street, Market Lavington we don’t know.