The Merritts were a big Market Lavington family. If we look at the 1891 census we find no fewer than 21 Merritts lived in Market Lavington. Amongst them was 10-year-old Robert who is just on the 1881 census but under the name Charles. He was Robert Charles Merritt.

This family is elusive on the 1901 census but Robert was an engine stoker living near Southampton.

Robert married Ada Jane Bolter on 21st August 1901. They emigrated to Canada soon after the birth of their daughter.

Our photo comes from Canada and dates from 1912. 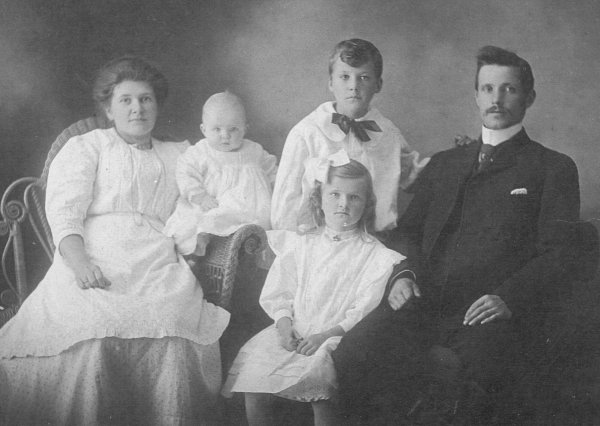 Market Lavington born Bob Merritt with wife Ada and children Percy, Dorothy and Leslie. The photo dates from 1912 and was taken in Canada.

It shows Ada Jane making sure baby Leslie stays perched on the chair back. The oldest boy is Percy, born about 1902 and the girl is Dorothy, aged 8. Robert – always known as Bob – is on the left.

The picture comes from Jean, daughter of Dorothy who produced a web page about her mother . Click here to read it

Jean has sent us other information. We’ll get it on the blog one day.