Bobby was an Easterton evacuee during World War Two and he was a recent visitor to Market Lavington Museum. It isn’t the first time he had returned to the area. In fact he had already had a mention on this blog when we published a piece from an Easterton Echo of October 1975 which was written by Gladys Windo and said:

During the ‘last year several families of evacuees have revisited Easterton. They were billeted here during the Second World War. Sidney Hamshere returned with his wife and family from Australia. He was staying with Mr & Mrs Hussey senior during the war. He called on Bill Hussey and myself and was very disappointed to see the old school gone.

Bill Emery who was billeted at the vicarage called with his wife & family from Germany.

Tony Emery and his wife and family paid a visit. Billeted with Mr & Mrs Davies, he now lives at Taunton.

Mr “Bobby” & Malcolm McGregor also returned. They called on Mrs Topp as they were billeted with Miss Etherington.

They all remembered the great competition to blow the church organ – for one shilling per week. All had happy memories of Easterton and hope to pay a return visit sometime.

Many in the village remember going to school with these evacuees.

For this visit, Bobby came alone and brought a photo of him outside his billet. 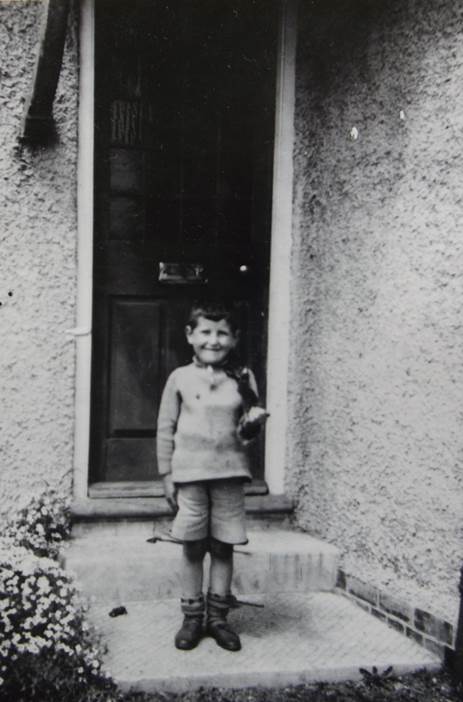 Bobby was an East end of London lad and he and his brother found a home with Miss Etherington. Frances Violet Etherington lived at Hill View on Kings Road. She had been born in 1874 in Hertfordshire and had, like many another member of her family joined the teaching profession. She became head at Easterton School and we think she retired when Miss Windo came in 1934. So by the time of the blitz, in 1940, Miss Etherington would have been about 66.

Bobby was a youngster and his memories are limited. He thinks he came three times, returning home to London after the blitz but coming back to Easterton when doodlebug and V2 raids started.

One strange little quirk was that Bobby, aged 5, was baptised at Easterton on 18th January 1942.

Bobby is trying to piece together his time in Easterton and would like to know more about Miss Etherington. She died in 1962 but there will be plenty of people who remember her.

Do get in touch if you can tell us anything and we’ll pass information on to Bobby who now lives in Aberdeen.