On September 17th Market Lavington Museum will be holding its Miscellany – 7.30pm in the Community Hall.

Apart from the talk and photos, a big part of the event is the food. Our archivist and curator have scoured the recipe books in the museum and have come up with a range of interesting possibilities. This year we hope to feature some recipes from the hand written note book of Lucretia Gye and amongst them is a steamed bread pudding. 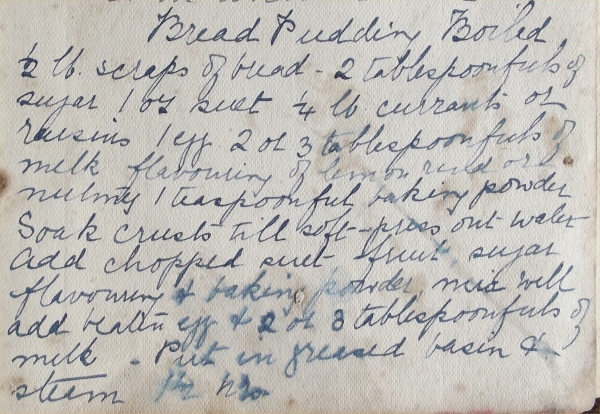 The recipe, obviously written in Lucretia’s own hand, was a way of making sure no food was wasted a very important consideration when Lucretia was writing the book in the 1930s.

But who was Lucretia? She has signed the book and given her address.

She would be thought of, these days, as the mother of Tom Gye. Lucretia was born, about 1885, as Lucretia Redstone in Devizes. Her father was a solicitor’s clerk and her mother was a school teacher.

In 1901, the Redstones lived on High Street in Easterton. Lucretia’s mother (also Lucretia) was a teacher at the school and our 16 year old Lucretia was listed as a candidate to be a pupil teacher.

By 1911 the Gyes were living on White Street in Market Lavington with their first born – Ethel and also old Mary Gye who was Joseph’s mother.

Do come along on the 17th September and taste some recipes from Lucretia – women who would have remembered the days when Victoria was our queen.