Good memories are a real source of knowledge and understanding. Here we have memories written down by Mrs Elisha in about 1977. Her memories date back and mention of the Central Flying School probably dates that to the time of World War One. Mrs Elisha, or Helena May Potter as she was, was born in 1903 and became the infant teacher at Market Lavington School in the 1920s. Even in 1977 she was still doing bits of supply teaching at the school – by then St Barnabas School on Drove Lane. These memories are about the brickworks and clearly are a response to a request for information which came from Peggy Gye.

Here’s an extract and below we have an abbreviated transcript. 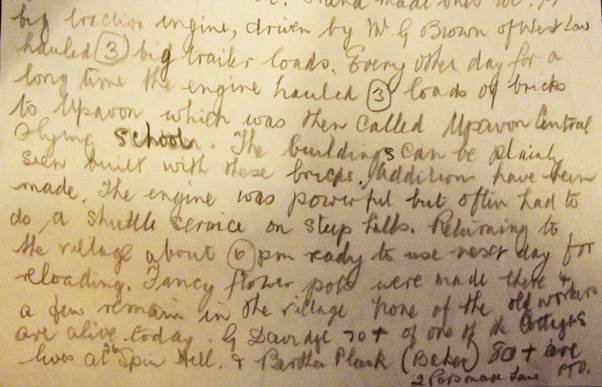 Mr Merritt, my neighbour in Park Road, tells me you are interested in the history of Lavington Brick and Tile works. I can remember an amount having lived here for 74 years. It was owned by a Thomas Holloway of London, his country home being the Manor House, West Lavington. A good standard of clay was worked from there. The workers were almost on slave labour.

The manager was Mr George who lived in the house there with his wife and six children. There were also five cottages belonging there which housed workers who were always there to see to the kilns. Mr Grey with wife and son, Mr and Mrs Davidge with 3 boys and 2 girls, Mr and Mrs Plank with 3 boys and 3 girls. These cottages had 2 bedrooms and were in poor condition.

Hundreds of bricks were made there – handmade ones too. A big traction engine driven by Mr G Brown of West Lavington hauled 3 big trailer loads. Every other day for a long time the engine hauled its 3 loads of bricks to Upavon which was then called Upavon Central Flying School. The buildings can be plainly seen built with these bricks. Additions have been made. The engine was powerful but often had to do a shuttle service on steep hills returning to the village about 6pm ready to use next day for loading.

Fancy flower pots were made there and a few remain in the village.

None of the old workers are alive today. G Davidge, 70+, of one of the cottages lives at Spin Hill and Bertha Plank (Baker), 80+ lives at Parsonage Lane.