It’s just one of those matters of fact. Without the water supply at Broadwell there just wouldn’t be a Market Lavington. In the days before piped water, this was where many villagers came, with buckets or bowsers, to collect the vital liquid.

By the mid 1960s, the need for drinking water from Broadwell had gone. But it still provided other functions. In this picture, the cars are there for their Sunday wash. 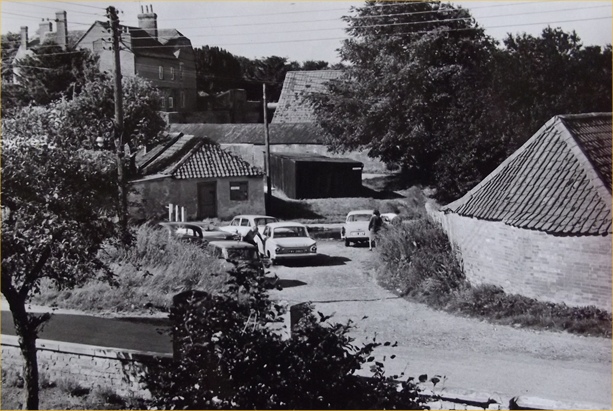 Broadwell, Market Lavington, as seen from Beech House in the mid 1960s

The car in the middle, with a man working on the passenger side door looks to be a Mark 1 Ford Cortina. It is a D registered car meaning it hit the road in 1964. The car on the right, with a women at the back of it is an older style Ford Anglia, probably dating from the 1950s or early 1960s. On the left we can see a part of a Mini – the iconic car of the early 60s. In front of that is an older, ‘sit up and beg’ black car.

This photo is taken from a Beech House window. White Street is running from left to right across the picture. The large house at the top of the picture is Knap Farmhouse.

The single storey building, just across the water from the cars was once the smithy operated by the Merritt family. That building and the ugly black sheds have all gone. The house called Old Forge stands there now.

To the left of the cars there is a small wooded area. The trees were deemed unsafe and felled. The young children’s play area is now sited there.