Parts of the area around Broadwell have changed a lot. Today’s photo lets us highlight some of the items which have gone and others which remain. 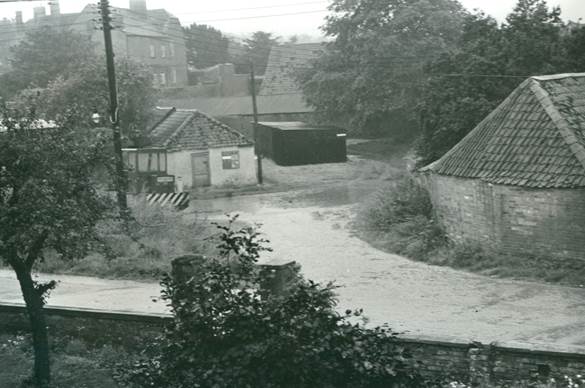 Broadwell, Market Lavington, in the 1960s

The barn like building on the right still exists. So too, does large Knapp House seemingly on a hill in the background. Its former barns – we can see a bit of roof at top centre – are now the White Horse Barns dwellings

White Street still continues to pass by Broadwell on its way up to Lavington Hill. A road still leads down to the water.  It may well be better surfaced these days and cars are usually parked there.

Between White Street and the water there is what looks like waste ground. This had once been a small wood but they were felled when trees started to die off.  The area is now a young children’s play area but at one time a 1960s themed space play area occupied the site.

Across the water the pale building under a pitched roof had various purposes. At one time the Merritt family had a smithy there. They also kept cows and had a milking parlour.  The Market Lavington Prize Band used to meet in that building on Sunday mornings to practise. There are local people who remember that with much pleasure for it was like having a free band concert.

The free standing black building which looks like a shed was just that. It was a cow shed.

All of those rather ramshackle buildings have been swept away and now a decent family home occupies that area.