An interesting, although rather alarming fact (as found on Wikipedia) is that 42% of all farmworker deaths caused by livestock are actually caused by bulls. No wonder methods of handling these animals of uncertain temperament were needed. It was found that ‘a ring in the end of his nose’ was ideal. A rope or pole could be attached to the ring and the animal could be easily controlled. Bull tongs could be used when there was no ring – maybe in a young animal or, perhaps, in any cow who was liable to cause damage to herself or her handler.

Today we look at bull tongs, sometimes known as a bull lead, which was used at Vicarage Farm in Easterton by the Merritt family who lived there. This bull lead is unusual in having a handle, making it look rather like a pair of handcuffs. 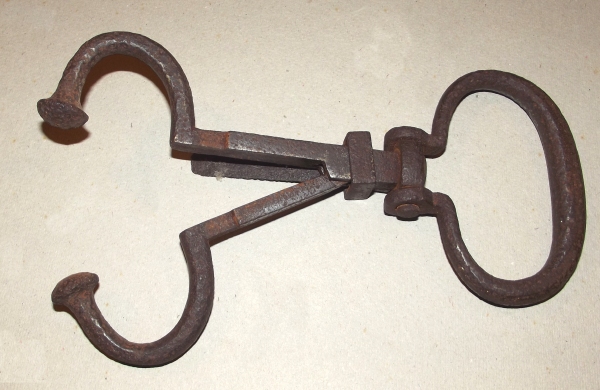 The open end could be inserted into the nostrils of the bull and then the slide moved up so that the two bobbles pressed into the soft tissue between those nostrils. Sad to say, if the bovine animal tried to pull, it hurt and that, basically, kept it under control.

That’s another welcome and unusual addition to our collection of farming equipment.