Carved stone – but where from?

When Mike was preparing ground for the Centenary Seat on the village green, his fork hit something hard. After a tussle, Mike came up with a piece of rather nicely carved sandstone.

And here it is. 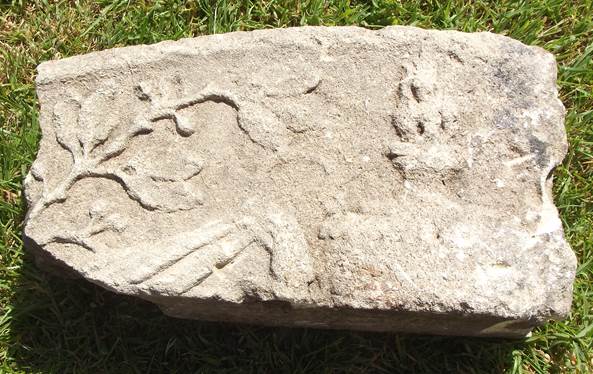 Carved stone dug up just outside Market Lavington churchyard, near the Community Hall

The question now arises as to where this came from originally.  We believe the land it was found on was originally a part of Grove Farm but it lies only just outside the churchyard. This leads some people to believe it is a part of an old gravestone – possibly 18th century. There appears to be some kind of urn carved on the right with the leafy plant clearer on the left. Both symbols can be found on gravestones but the very even flat base of the stone might suggest this is not what this was.  But there again, the urn only appears to be half there.

As a gut feeling, we reckon this stone carving could date from the 18th century.

Maybe somebody out there could tell us more.