Christmas in the Village (2)

This drawing was published, along with E J Stowe’s article, in the Wiltshire Life Magazine for December 1946. It shows St Mary’s Church which was (and is) one of two church communities in the village along with what was, in 1946, the Congregational Church. 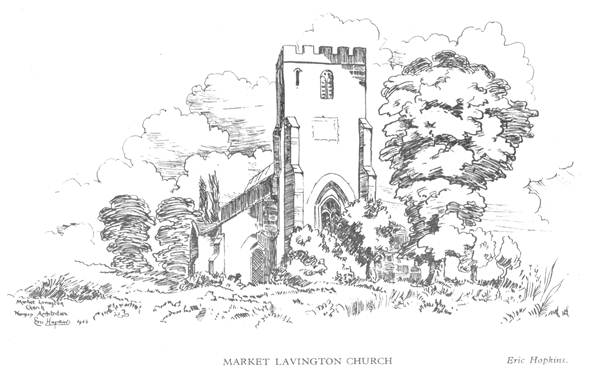 The drawing is credited to Eric Hopkins. Eric has chosen to produce his sketch from the East end of the church, showing the tower to best effect. It’s a delightful image which Eric signed and dated, commenting on the fact that the church was built in the Norman style.

So who was Eric Hopkins?

Eric was born in 1926. His parents, Samuel and Ada (née) Alexander had married in 1923.Eric was photographed as quite a young man, perhaps aged about 10, outside the family home on Church Street, Market Lavington when building works uncovered an old notice about the Hope Coach (click here).

We know Eric produced this sketch in 1946. The following year he married Phyllis Hatswell. The Hatswells had lived at the Market Place in 1939. A daughter was born to the couple in 1952.

We haven’t traced what happened to Eric but by the mid-60s Phyllis was listed as head of her house and the only elector. Her address was given as The Manor House so we imagine she was an employee of Dauntsey’s School who owned that building. She died in 2001.