Our picture today shows three people on a church gift day in 1972. 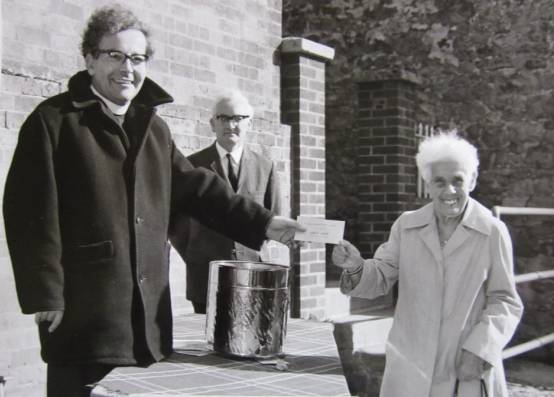 Martin Chadwick, Vicar of Market Lavington, receives an envelope from Mary Taylor, on holiday from Canada

Mary Taylor (right) was born as Mary Lavinia Redstone in Marden, Wiltshire towards the end of 1891. Her mother was a certificated teacher and in the early years of the twentieth century she became head of Easterton School. The family moved to Easterton and in 1911, when Mary was 19, she was living with her parents and a brother on High Street in Easterton.

Mary married Edward Taylor in 1919. Edward was a Canadian soldier, known as Bliss. The couple set up their home in Canada. We have seen Bliss before on these pages. Click here.

Mary’s sister, Ethel married Jo Gye. This means Mary was the aunt of Tom Gye. In 1972 she was on holiday, no doubt visiting her relatives.

Lionel Thynne (centre) was a churchwarden in 1972. His full name was Arthur Lionel Thynne and he had been born in Devon in 1918. Arthur married in 1951. By 1964, the Thynne family lived on The Spring in Market Lavington.  Arthur Lionel died in 1995. There are still relatives in the area.

In our photo Martin is receiving a gift envelope from Mary outside the Old School in Market Lavington.