Collecting for the centenery

Next year – 2014 – we will mark the centenery of the start of World War 1 which, sadly, did not live up to the name given – the war to end all wars.

Market Lavington and Easterton played quite significant roles in the war. First of all, many of our own young men served in the forces and in the various theatres of war which opened up during the next four years. If you have personal stories – letters, postcards or just things told you about how the ordinary chaps from our area coped during the war –  then we’d love to hear from you so that we have the opportunity to share your stories with a wider audience. Maybe you have photos of a local soldier (and for us that means from Market Lavington or Easterton) in uniform and just a little tale of what the soldier did. It would be good to be able to honour such men who served.

But our parishes also had a wider role. Salisbury Plain was a training area for Commonwealth troops and we know that many Australian and Canadian soldiers spent time in Lavington and Easterton before being sent to the front to fight. People all over the world may have tales they have heard about Market Lavington and, in particular, the Pond Farm Camp.

Here, as a reminder, is a  little medallion from Valcartier Camp in Canada. This was an embarkation point for soldiers coming to train in England. 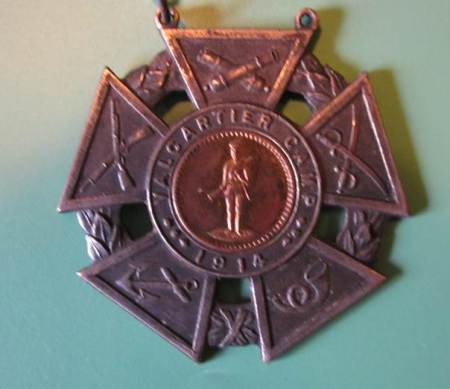 Medallion from Valcartier Camp, Canada, found in a house in Market Lavington

This medallion was found in a crack in a cupboard at 60 High Street, Market Lavington. The house had been occupied by Mrs Crouch and her sister married a Canadian who was billeted in Market Lavington. It was a more recent resident at the house who found this item and gave it to the museum.