This small book forms part of the collection at Market Lavington Museum.

You could read the book – a delightful collection of information in text and images about life in rural areas – and wonder why, specifically, Market Lavington.

The answer lies in the foreword. The author, Hugh Brandon Fox, was a Market Lavington man. 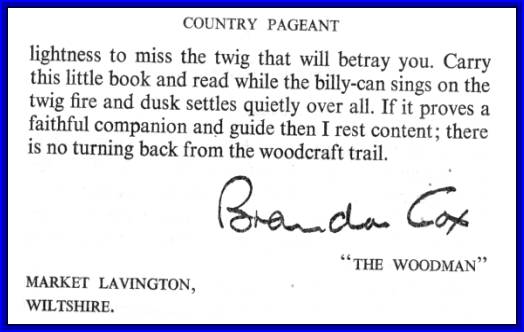 Hugh Brandon Cox was not born a Wiltshireman. He came from East Anglia and, it must be said, the large skies of the flat lands of the east remained his abiding love. In fact, Hugh, who was born in 1917, didn’t move to Wiltshire until after the second world war. One of his projects, whilst living in our part of the world was founding ‘The West Countryman’ magazine but clearly, he also found time to write and illustrate books.

‘Country Pageant’ contains both colour and black and white illustrations by the author.

Hugh Brandon Cox did return to the east, settling first in Cambridge and finally in Norwich. He died in 2004 but his memory is assured by a large catalogue of books, drawings, paintings, photographs and films