Cubs at the Museum

It was very good to welcome the cub pack to the museum on 20th May 2013. There was a lot of interest from the cubs in many aspects of life in the village past. They wanted to know about their houses and areas. Of course, they wanted to know about The Scout Hall. In particular, they loved items of old cub uniform we have. And here we have a cub of 2013 modelling cap, scarf and woggle of the late 1970s. 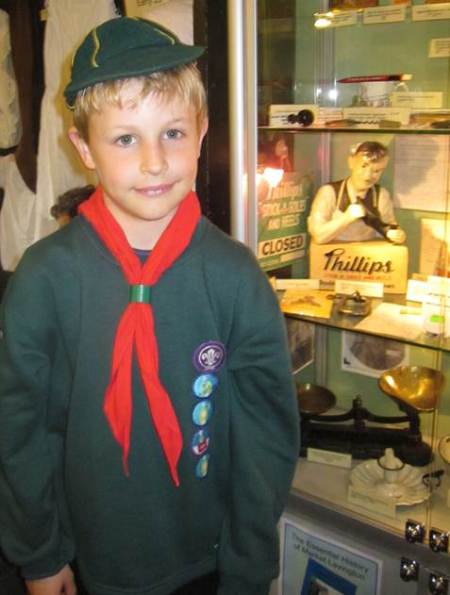 These days the cubs do not wear caps – very much a thing of the past. Thirty five years ago the Market Lavington cubs had a red scarf. Now the cubs are just the Lavington pack and they wear white.

In the cabinet next to the cub we can see items from Ken Mundy’s shoe shop, including the much viewed Phillips Stick-a-sole man. The shelf below has items relating to John Baker and his family who were tin smiths and what we might now call hardware merchants in Market Lavington.