A large part of the parishes of Market Lavington and Easterton lie up on Salisbury Plain. Most of this now falls into the military training range but agriculture is carried on at the periphery. It is on the Plain that we get big open fields and the cultivation work is long and lonely.

Here’s a photo which we used in a previous Museum Miscellany (there will be some farming pictures this year on September 15th). We do not have a date for the picture, but it is almost timeless. 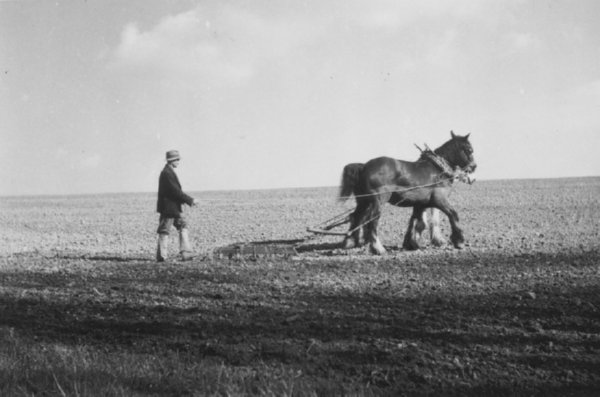 The loneliness of the Salisbury Plain farm worker. The date of this photo, taken in the parish of Market Lavington, is uncertain.

The chap here at least has his horses for company. His job, cultivating the prairie sized field must have seemed endless. The photo was probably taken in autumn or winter, so the team probably won’t cook in the sun. Once away from the edge of the field there’s no shelter of any kind. It is interesting to note that the farm worker is wearing knee high gaiters.

This view is in the opposite direction and looks off Salisbury Plain and down into the villages. The powerful, four wheel drive tractor has Lavington School in front of it – except that it is down in the vale. The tractor has an air conditioned cab and, no doubt, has a wonderful entertainment system for the farm worker. The hard graft has gone out of the job for our cultivator here does not have the weary trudge behind the horses but he is still on his own. Actually, he may well have a radio link to others.

The tractor is hauling a vast roller – it covers a huge swathe of land in one pass – based on a very old design originally devised by a chap called William Cambridge. William has featured on these pages before because, for a while, back in the 1830s and 40s he was a Market Lavington man. Indeed, the first Cambridge rollers were made in Market Lavington.

The view from the Plain is grand, even on a rather cloudy evening. We can certainly see across to The Cotswolds.